A search for truth for sign on iconic Gwanghwamun

A search for truth for sign on iconic Gwanghwamun 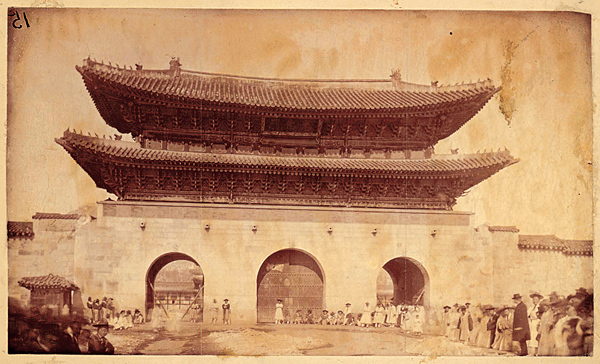 An old photograph of Gwanghwamun said to have been taken before September 1893 that is stored at the Smithsonian’s National Museum of National History shows the sign with a black background. The photograph was revealed to the public in March by the Buddhist monk Hye-Mun, director of Find a Place for Cultural Heritage. [CULTURAL HERITAGE ADMINISTRATION]

Gwanghwamun - the main gate of Gyeongbok Palace - is often regarded as the “face of Seoul.” The gate leads tens of thousands of visitors each year into Gyeongbok Palace, which served as the main royal residence during the Joseon Dynasty (1392-1910), not to mention being featured in the background of countless photos snapped by those visiting the city.

Perhaps the current debacle is the price of fame.

Recently, the sign over the gate that reads “Gwanghwamun” in Chinese characters has come under controversy for allegedly being the wrong color. Currently, the sign has a white background and the writing is painted in black. It’s been like this since six years ago when the latest restoration project was finished.

The Cultural Heritage Administration (CHA), which carried out the restoration, held an advisory conference last month and decided to do more in-depth research into historical materials and study of old photographs of the gate to determine the original colors. If it turns out that the colors should be reversed, it seems inevitable that the CHA will have to take responsibility for the error.

Back in 2005, the late President Roh Moo-hyun began a project to restore Gwanghwamun to its original state, which included recreating the sign to be identical to the original sign created in 1866 under King Gojong (1852-1919). However, after the project was completed in 2010, the new sign began to develop cracks within just a few months, drawing criticism that the restoration of this important piece of cultural heritage, which was carried out by CHA, was not done carefully and properly.

Even before the sign cracked, a dispute had been raging for two years over whether the writing on the sign should be in hangul or in Chinese characters as on the original.

When King Gojong restored the damaged Gyeongbok Palace in the late 19th century, after the palace had been destroyed during the Japanese invasion of Korea in the 16th century, he had put up a sign over Gwanghwamun gate. The Chinese calligraphy was painted by Im Tae-young, a restoration manager working for King Gojong. 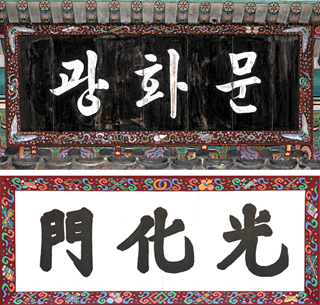 But during the Japanese colonial era (1910-45), the Japanese government moved the gate to a different location and it later burned down during the Korean War (1950-53). Then former President Park Chung Hee decided to restore the gate in 1968 and changed the sign to be written in hangul and in his own handwriting. At the suggestion of late President Roh, the gate was restored to its original state with Im’s Chinese calligraphy.

CHA has announced it will replace the cracked sign with a new one and maintain the original sign with Chinese characters. The new sign is nearly ready, according to CHA, and is currently going through the “wood drying stage.”

But it looks like CHA may have to remake the sign again as the recent debate has surfaced concerning its colors. Fingers are once again being pointed at CHA for not following the rules for restoring pieces of cultural heritage, which state that they should be restored to their original state, and for not investigating thoroughly the original appearance of the sign before proceeding with the restoration.

The controversy surrounding the reversed colors began when the Buddhist monk Hye-Mun, director of the civil society group Find a Place for Cultural Heritage, revealed a photograph of Gwanghwamun he obtained from the Smithsonian’s National Museum of Natural History in March. The photograph is said to have been taken before September 1893, and it can be distinguished with the naked eye that the background is black while the Chinese characters are a lighter color. The photograph seems to conflict with the photographic plate taken in 1916 that is possessed by Tokyo University, on which CHA based its restoration.

“We found no other materials to refer to except the two photographic plates, one possessed by the National Museum of Korea and a better preserved one possessed by Tokyo University,” said an official from CHA, explaining the limited resources available at the time of the restoration.

“Because the original form of the sign was not preserved, there were many difficulties,” said Baik Sung-wook, an engineering professor at Sejong University who wrote up a report on the Gwanghwamun restoration in 2010. “The focus was to bring back the exact shape of the handwriting rather than the colors of the sign.”

According to insiders, there were issues at the time surrounding planning out the restoration. A source working in the field of cultural heritage who requested anonymity insisted that those involved in the restoration “changed the contrast of the photograph of the sign by making the background lighter and the writing darker to allow a clearer view of the shape of the letters,” adding that “it looks like they just referred to that altered version when deciding the colors.”

When the JoongAng Ilbo studied several photographs and paintings of Gwanghwamun from the past, the signs mostly had black background and white writing. To illustrate, in the photograph of Gwanghwamun gate that appears in “The Passing of Korea” (1906), published by American missionary Homer Hulbert, who was also a close friend of King Gojong, the sign has a black background, while the color of the writing is difficult to distinguish. The same is true of the photograph in the Japanese architect Sekino Tadashi’s compilation “Ancient Sites and Monuments of Joseon” (1905). 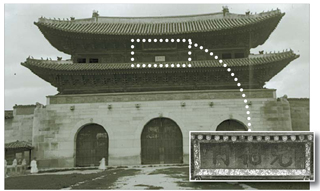 A photograph possessed by Tokyo University said to have been taken in 1916 was referred to when creating the new sign for Gwanghwamun. A source said the contrast of the sign was adjusted to get a clearer view of the writing. [CULTURAL HERITAGE ADMINISTRATION]

Most of the signs in paintings and postcards featuring Gwanghwamun had black background. The 1915 landscape painting of Gyeongbok Palace by late Joseon painter An Jung-sik (1861-1919) titled “Baegakchunhyo,” also known as “Spring Dawn at Mount Baegak” (Cultural Heritage No. 485), shows the sign on Gwanghwamun with a black background. However, the writing is not distinguishable.

Western-style painter Sim Hyung-gu also painted Gwanghwamun in 1940, and his work also shows the sign with a black background and white writing. This painting was widely distributed on postcards and was also introduced in the October edition of the Korean Association of Architectural History’s magazine in 2008. When former president Park Chung Hee restored the gate in 1968 and changed the writing on the sign to hangul, it also had a black background with white writing.

“Among all the palaces, Gyeongbok Palace was in the highest value,” said archeology professor Hong Soon-min of Myongji University, who published the book “The History of Our Palaces” (1999). “Therefore, it is highly likely that the sign of Gwanghwamun is colored black with white or gold writing. Even if it takes more time, more professional research should be done while referring to experts at the same time to remake a new sign correctly.”