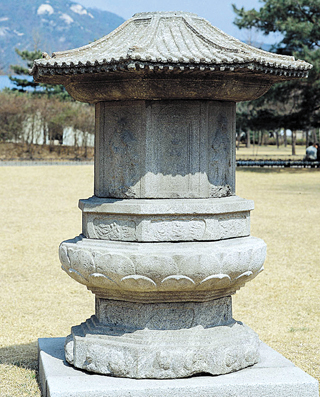 This stone pagoda, which was built during the Goryeo Dynasty, stands in front of the main hall at the site of Bowonsa Temple.

Although little is known about Bowonsa Temple, which is believed to have been built during the Baekje Dynasty, it has attracted great interest from academic circles ever since the Rock-Carved Buddha Triad in Yonghyeon-ri, Seosan (National Treasure No. 84), was found at the site in 1959.

The site also contains the stele and stupa built to commemorate State Preceptor Beobin, along with flagpole supports and a stone basin.

Judging from the relics found at the site, the temple must have been huge.

This outstanding stone pagoda of the early Goryeo Dynasty is rather formally carved, and gives an impression of gravity and stability.