Operatic version of ‘The Shining’ opens

Operatic version of ‘The Shining’ opens 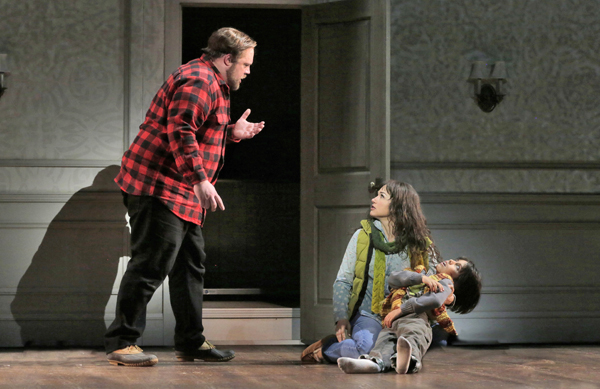 Mark Campbell wants people to issue warnings when they leave his operatic adaptation of “The Shining.”

Campbell wrote the libretto for composer Paul Moravec, and their creation was given its world premiere by the Minnesota Opera on Saturday night at the Ordway Center for the Performing Arts in St. Paul.

“I want them to be moved by the story. I want them to be scared,” Campbell said. “I would love if this were the first opera in history that engendered a response from an audience that was: ‘Don’t go in there!’ - the way a horror film does.”

Moravec and Campbell based their version on Stephen King’s 1977 novel, which inspired the 1980 movie by director Stanley Kubrick starring Jack Nicholson and a 1997 TV miniseries. They both cited a quote attributed to King that termed the film “like a big, beautiful Cadillac with no engine inside it.”

“What ‘The Shining’ is all about and the issues that Jack Torrance and his family are dealing with give rise to song,” Moravec said. “The story just sings naturally.”

Moravec won the 2004 Pultizer Prize for music for a chamber piece titled “Tempest Fantasy.” He composed “The Letter,” which premiered in 2009 at the Santa Fe Opera, and a pair of one-act works that debuted four years later at the Kentucky Opera, “The King’s Man” and “Danse Russe.”