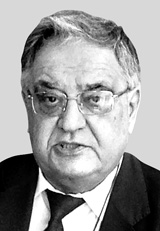 Three-dimentional printing, oil refining and new drug carriers are areas of scientific research with great potential for collaboration between Belarus and Korea, said a leading Belarusian chemist who specializes in new materials.

Vladimir E. Agabekov, director of the Minsk-based Institute of Chemistry of New Materials at the National Academy of Sciences of Belarus, has a close bond with the Korean scientific community dating back to 2010.

Over the past six years, the professor has built a strong rapport with researchers at the Seoul National University (SNU) and the Korean Society of Industrial and Engineering Chemistry (KSIEC).

“Korea and Belarus are not countries rich in natural resources,” said Agabekov, as he sat for an interview with the Korea JoongAng Daily on May 2 at the Lotte Hotel in Sogong-dong, central Seoul.

Science and technology collaborations to discover and apply new materials, he said, “will give a new impetus for future relations between Belarus and Korea for the improving of our economics of our countries”

This marks Agabekov’s fourth visit to Korea, and his five-day trip included discussions with Lee Woo-il, executive vice president of SNU and a lecture on biomaterials at a conference of the Korean Society of Industrial and Engineering Chemistry in Yeosu, South Jeolla.

The study of new materials can have very tangible results, and Agabekov’s institute is involved in various projects such as developing new co-polymers to produce thermostable fibers, which can by used for firefighter suits to withstand temperatures up to 250 degrees Celsius (482 degrees Fahrenheit). He is also involved in developing new forms of carriers of medical drugs.

Agabekov’s latest research with the SNU Department of Chemical and Biological Engineering involves the study of new surfaces from nano and micro materials. This research can be applied for medical purposes, including the delivery of drugs and medicine or even as electronic conductors.

Such growing cooperation has enabled immediate contact between his researchers and their Korean partners, including speaking at each others’ schools. They will also present their research at an upcoming International Conference on Organized Molecular Films in Helsinki in July.

“For the first time, my students and researchers from Belarus have immediate contact with researchers and students from Korea,” he pointed out. “They message each other through KakaoTalk,” referring to the popular Korean instant messaging app.

Agabekov emphasized that the opportunity for scientists to liaise with similar-minded researchers in different countries is facilitated by diplomatic efforts.

“It was meaningful and important for us that our ambassador to Korea also visited our institute and took an active interest in bolstering cooperation in the field of science and technology in the country she is posted at,” added Agabekov, referring to Belarusian Ambassador to Seoul Natallia Zhylevich.

“That kind of interest is not always common and has been immensely helpful.”

The professor proposed to expand science and technology relations one step further to establish joint laboratories between Korea and Belarus.

He pointed to Korea’s having some of the world’s largest oil refineries, which he called, “among the top 10 in the world in terms of capacity.”

The professor pointed out the two countries are looking for alternative sources of energy, suggesting a joint project in refining oil.

Agabekov lauded Korean students’ zeal for scientific knowledge. “Korean students are very curious and very responsible. They want to learn and get acknowledged.”

He recalled that the number of students who signed up for his guest lecture doubled since his first in Korea.

“You have to remember, I teach a very specific field, and there are a limited number of students who study this subject, so that kind of interest is impressive.”