Even if you lack faith, finding love is possible

Even if you lack faith, finding love is possible 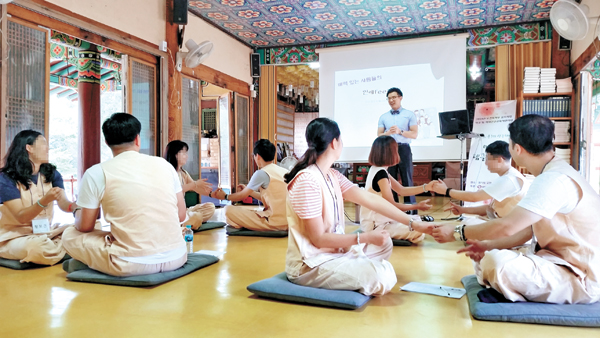 A one-day temple stay program organized by the Jogye Order of Korean Buddhism provides a place for young and single people to come together. [JOGYE ORDER OF KOREAN BUDDHISM]

Buddhist, Christian and Catholic institutions, putting their theological differences behind them, have jointly decided to help the government in coping with Korea’s ever-stagnant birthrate.

Korea ranked last among the developed members of the Organization for Economic Cooperation and Development (OECD) by fertility rate last year, with 1.3 births per woman. In fact, it has had one of the lowest fertility rates in the OECD for the last 15 years.

The decreasing number of people getting married in Korea is one of the major causes of the low birthrate. Unlike Western countries, where premarital cohabitation is not unusual and the percentage of births outside marriage is many times higher, in Korea, marriage is a necessary condition for giving birth to children, according to a study by the Ministry of Strategy and Finance.

The number of married people in Korea has steadily fallen from 329,087 in 2011 to 302,828 in 2015. To combat this, religious institutions have organized a variety of events to encourage marriages.

In September 2013, Park Yoo-jin, a single 30-year-old woman, visited Heungguksa, a Buddhist temple in Goyang, Gyeonggi. For Park, a non-Buddhist, the visit wasn’t religious, but was instead done to participate in a matchmaking temple stay program.

“After a series of disasters of breaking up with my boyfriend, quitting my job and having my pet die, I went there to empty my mind,” Park said. “I was in a state where I couldn’t afford to get married.”

The one-day temple stay program was organized by the Jogye Order of Korean Buddhism to provide a place for young and single people to come together. A total of 30 people - 15 women and 15 men - participated in recreational events such as making paper lotuses. The event was hosted by workers from matchmaking companies.

Through the program, Park met her present husband, Yoon Tae-hun, 32. It was love at first sight, Park said. After dating for two years, the two tied the knot last October.

“I’m actively recommending the program to my friends, telling them it’s not anything religious,” Park said. “Even if it’s a small idea, it would be a great help to people like me if religious organizations try to solve marriage problems.”

Other religious organizations are also trying to combat the low birthrate.

The Christian Council in Korea, for example, organizes camps to encourage women of childbearing age to give birth. The camp offers detailed information on childbirth and child rearing, as well as showing them what positive marriage and families look like.

The Archdiocese of Seoul, twice every year, holds Natural Family Planning lectures for married women, where they deliver their pro-life arguments and provide information related to pregnancies and childbirth.

Last December, members of the religious community, in a joint statement, vowed to combat the low birthrate in Korea by holding a conference with the government, civil organizations and municipal organizations on April 19.

“The religious communities are paying attention to the low birthrate problem,” the director of the Jogye Order of Korean Buddhism’s social welfare foundation, Choi Kyung-hwan, said, “and we will collaborate in our efforts to combat the problem. Only when the youth are happy can our nation become happier.”

Four months since the joint statement, the religious institutions are further reinforcing their programs to encourage marriage and childbirth.

The Jogye Order of Korean Buddhism increased the number of matchmaking temple stays from two to three times a year and is expanding the number of participants to 60.

“The program is very popular, as there are people who participate in the program multiple times,” said an official from the Jogye Order of Korean Buddhism.

The Christian Council of Korea, starting from 2017, will hold camps for women of childbearing age more often and organize such events for married couples as well.

The Ministry of Health and Welfare vowed to support the religious institutions’ efforts to increase the birthrate.

“The government will gradually increase subsidies to such programs organized by religious institutions,” said Jung Yoon-sun, director of the Ministry of Health and Welfare’s division of population policy.