Age is no barrier for Wang in Morocco

Age is no barrier for Wang in Morocco 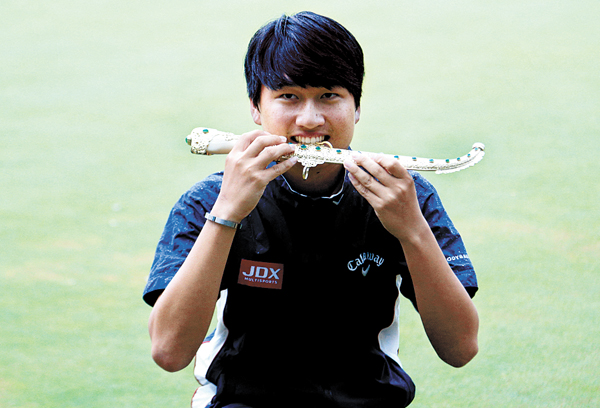 Korean golfer Wang Jeung-hun poses with the dagger trophy after the dramatic European Tour win on Monday during the Trophee Hassan II. [GOLFFILE]

Korea’s Wang Jeung-hun made three consecutive clutch putts in the thrilling final moments of the Trophee Hassan II in Morocco to bring home his first European Tour title on Monday.

At 20 years old, Wang is the youngest player to win a European Tour event this year, which took place at the Royal Golf Dar Es Salam in Rabat to commemorate late King Hassan II.

He started the tournament tied in 17th place after going one stroke under par at 71 in the first round. The next day, on Saturday, Wang made a leap in the standings to tie at second after shooting 4-under 68 for the round to aggregate 5-under by the half way, one stroke behind then leader Francesco Laporta of Italy.

The third round on Sunday was a rough ride for Wang, who had three bogeys each before and after the turnaround to aggregate six while carding four birdies to finish the round with a disappointing 2-over par and at fifth in the standings.

In his fourth round, however, Wang made a remarkable comeback, bogeying only one hole in the par-4 eighth while grabbing three birdies, including one in the 18th with his four-meter clutch putt on the green. Although he roughed his tee shot in the final hole, Wang finished the round 2-under par to tally 5-under 283 for the entire tournament, matching the record of Spanish golfer Nacho Elvira to force the competition into the playoff.

The playoff was dramatic as the final few holes of the fourth round. At par-5 18th hole, the Korean birdied the first round of the playoff with another clutch putt, this time an astonishing ten-meter putt, and forced the playoff to the next round to settle the score with Elvira. Eventually, Wang nailed his third clutch putt of the day from three meters away to card his third consecutive birdie while Elvira parred the hole.

“I’m so excited right now,” said Wang after the win “I think I won’t sleep tonight.

“It was a long putt (at the 18th hole of the final round). My caddy said not to think about the playoff so I putted without thinking. I got a chance. I don’t remember how I pulled the last two holes. I think I did well this week.” Wang added.

The victory comes after Wang’s compatriot Lee Soo-min won the Shenzhen International on April 25, making Wang’s European Tour win the second victory claimed by a Korean and the third consecutive win by an Asian golfer this season. Wang’s win is also the 10th win in the history of the European Tour seized by a Korean golfer and the third this season by a golfer playing under a sponsor’s invitation.