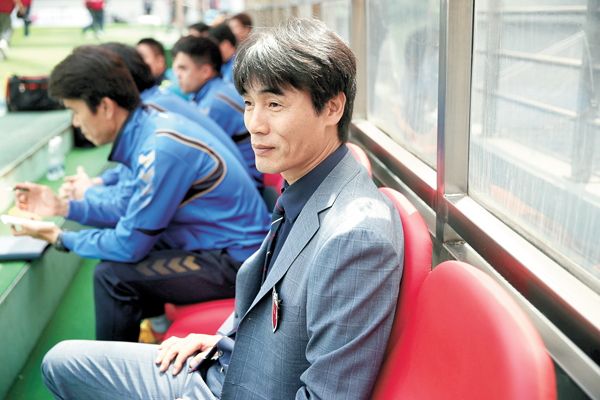 Two men, who once represented Korea as a striker and a defender, met again as managers for K-League elite teams over the weekend. At the end of the day, it was the Pohang Steelers and Choi Jin-cheul’s defensive tactics that triumphed over FC Seoul and Choi Yong-soo’s offensive talent as Pohang beat Seoul 3-1 on Sunday.

Seoul’s manager, Choi Yong-soo, and Pohang’s manager, Choi Jin-cheul, were teammates for the Korean national team during the 2002 World Cup when Korea made history by advancing to the semifinals of the global football tournament. As these two legends met again, now for the first time as the managers, Sunday’s game received added attention.

Until last season, the Pohang Steelers were under the watch of Hwang Sun-hong, another Korean football legend who played with the two Chois in 2002. Back then, the matchup between Seoul and Pohang was highlighted as it featured the clash between these two illustrious forwards. But with Choi Jin-cheul newly appointed as the head of the Steelers, the matchup between the two teams became a clash between offense and defense.

The match on Sunday was a thrilling event for fans, as it included a series of dynamic plays that generated four goals followed by a gripping upset by the Steelers. Most analyses by the experts predicted a victory for Seoul. It was a reasonable presumption, given Seoul’s firepower, bolstered as it is by Carlos Adriano and Dejan Damjanovic. Seoul is also the top-ranked team in the K-League standings. By comparison, Pohang has been struggling, getting knocked out of the Asian Champions League (ACL) and stuck at the bottom of the K-League standings, not to mention all the losses it suffered from injuries in April. 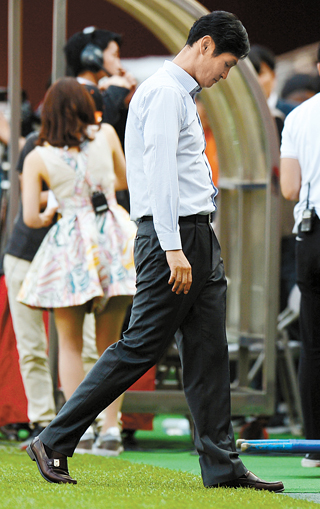 But the Steelers, and Choi Jin-cheul, wouldn’t let the odds get the best of them. Piling in three goals against Seoul, the Steelers carded their first winning-streak of the season by winning their second game in two weeks. They also tallied 12 points total after the win on Sunday, preparing a stepping stone by which to advance to the top pool of the rankings.

It was Choi Jin-cheul’s defensive tactics that thwarted Seoul’s offense. Choi Jin-cheul and Pohang came out with a 3-4-3 formation with three defenders at the back. The defensive line was sturdy enough to extinguish Seoul’s strikes. After the win, the Steelers’ manager credited their success to defense. “Seoul’s offense is solid,” said a satisfied Choi Jin-cheul. “So we paid special attention to defense. We had three backs and they played their game well. They concentrated on team play in our side of the pitch. Their passion and the team’s tactics had a synergistic effect that led to some good defensive plays.”

Of course, just playing defense doesn’t win a game. What earned Pohang its win over Seoul was the fast break plays launched from the back of the field. The Steelers’ counterattack caught Seoul’s defenders off guard. In fact, all three goals on Sunday came from counterattacks in the 20th, 32nd and finally, in the minutes during injury time after the second half.

“Strikers were on their toes today and played good games with counterstrikes,” said Pohang’s manager. “Yang Dong-hyen especially moved around well out there.”

While Pohang smiled, Seoul, and manager Choi Yong-soo, left the field with their heads down. Choi Yong-soo is one victory short of grabbing 100 K-League wins as a manager and had hoped Sunday would be the day. But his hopes came crashing down as Seoul lost to Pohang by two goals, the first loss at home this season. “We wanted to keep the home-game winning streak going, but things didn’t feel right, even before the game,” said Choi Yong-soo. “The players were without their fighting spirit and were lethargic throughout the entire match. I need to revamp the team internally.”

The pressure for Choi Yong-soo and FC Seoul is high, as they have a lot at stake including defending the top position in the K-League standings as well as the upcoming knockout stage of the ACL. “Our focus is channeled on the ACL Round of 16. We will remedy the shortcomings spotted during the game against Pohang and make sure we won’t repeat the same mistakes,” added Seoul’s manager.