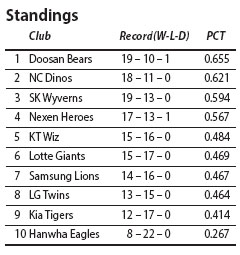 The first week of May was another dramatic period for Korea Baseball Organization (KBO) fans.

The most exciting event is likely the eight-game winning streak that NC Dinos is on. The Dinos joined the KBO in the 2013 season, making this year its fourth season in first division baseball since its establishment in 2011. Despite their short history, the Dinos made consistent appearances in the postseason in 2014 and 2015. This year, they may be Korean Series material. So far, the Dinos have had 18 wins and 11 losses, and are currently ranked second in the KBO standings behind the defending champion Doosan Bears.

One of the key players behind the Dinos’ frenzy in the ballpark is free agent Park Suk-min. Park inked a $8.12 million deal for four years with the Dinos to become the most expensive third baseman in the history of the KBO. Since the season started, the 30-year-old slugger has had a .304 batting average, five homers and 23 runs batted in, becoming the driver behind Dinos success. Although it was a high risk investment on Dinos’ part, it seems that the investment has generated a high return for the team so far.

However, the Dinos batting lineup is so stacked that Park cannot be solely credited with the team’s success. The Dinos have Eric Thames and Na Sung-bum in its batting roster as well.

Thames, last year’s KBO MVP and Golden Glove Award winner, is living up to his name as he is leading the team with a .358 batting average, seven home runs and 25 runs batted in.

Along with Thames, the 26-year-old Na is also an invaluable asset for the Dinos with 41 hits during 113 at-bats, six home runs and 27 runs batted in. With Thames and Park in the infield and Na in the outfield, the Dinos’ fielding performance is deemed to be one of the best defensive lineups in the KBO today.

After the Giants lost Hwang Jae-gyun on April 29, the team needed someone to step up to fill his shoes at the plate. It turned out Son was enough of a talent for Giants manager Jo Won-woo to rely on.

At the onset of the crisis, the Giants manager decided he would take measures to calm the players and relieve the pressure. His effort paid off as the Giants became the first team this season to cause defending champion Doosan Bears to go on a three-game losing streak.

Players that have been in a slump in the past few weeks came back into the limelight. Giants pitcher Josh Lindblom, for instance, has struggled in the past six games during the team’s skid with four losses and earned run average of 7.44. But in the first game on May 6 against the Bears, Lindblom pitched for seven and 1/3 innings without conceding any runs. More noteworthy is the Giants outfielder Son. During the six-game slip, manager Jo constantly rotated the batting lineup to bolster the cleanup spot in the middle of the batting order with Hwang out of the picture.

Son came to the rescue for Jo. Son has been making constant appearance as a table setter as first in the lineup. However, on May 3, Son went into the game as third in the batting order. In the two games on May 3 and May 4, Son lived up to Jo’s expectations by getting on-base in both games. He appeared again, batting third against the Bears over the weekend, collecting seven runs and three stolen bases to lift the Giants over the Bears. As of Monday, Son’s season records stand at .306 batting average, three home runs and 14 runs batted in.