Banana is the new honey butter

Banana is the new honey butter 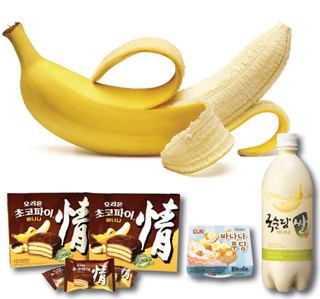 From makgeolli to snacks and pudding, food makers are adding banana flavoring to food items in hopes it will be as popular as honey-butter flavoring last year.

Bananas are one of the cheapest and most consumed fruits in Korea. But no one thought of combining bananas with chocolate until Orion Confectionery came up with Choco Pie Banana.

Since the marshmallow-filled chocolate pie has had but a single version for 42 years, the launch piqued the interest of snack lovers.

Orion devoted a team of 10 researchers to creating a new Choco Pie. For three years, they experimented with 20 different flavors and finally settled on banana.

“They concluded that the combination of chocolate and banana was the best,” a representative of Orion said. “We’ve also learned that banana is one of the most beloved and consumed fruits, so we figured that Choco Pie Banana could appeal to local consumers.”

Orion said it blended banana flakes and puree - not artificial banana powder - with the marshmallow inside the pie, which maximizes the sweet flavor.

Orion’s experiment proved successful as it sold over 14 million packs of Choco Pie Banana within three weeks of its launch in early March.

In the first month, the new Choco Pie was hard to come by in many convenience stores and supermarkets. That prompted Orion to expand production lines for Choco Pie Banana in April.

The confectionery maker operates in overseas markets such as China and Vietnam, but it remains unclear whether the banana version will be introduced to those markets.

“A discussion is underway regarding the issue, but nothing is decided,” said Lee Yoo-ri, a public relations official at Orion. “For now, we are busy keeping up with rising domestic demand.”

Rival snacks have jumped on the banana idea.

As always in Korea, a liquor maker followed suit.

Kooksoondang, a producer of makgeolli, or traditional Korean rice wine, unveiled a rice wine mixed with banana puree in April.

Kooksoondang Rice Makgeolli Banana was released in 11 other countries including the United States, United Kingdom, China and Japan.

“We believe the new makgeolli will gain popularity among young consumers because they always look for fresh flavors,” a spokesperson for the liquor company said.

The company said that it will introduce makgeolli blended with different fruit flavors over the coming months.