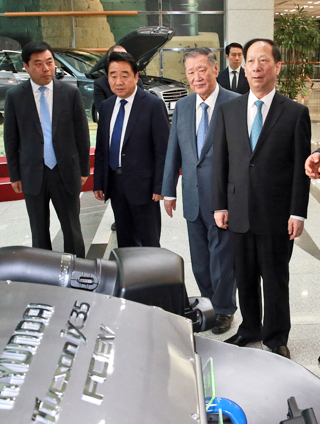 Shi Taifeng, Governor of Jiangsu province in China, right, is briefed on the hydrogen fueled technology behind Hyundai Motor’s Tucson at the company’s headquarters in Yangjae, southern Seoul, on Monday. The Korean automaker’s chairman Chung Mong-koo, second from right, was also at the event. Hyundai Motor’s affiliate Kia Motors has a production plant in Jiangsu province that manufactures 890,000 units of 12 different models a year. It is the largest production plant in the province. Chung, while citing the 41 Korean auto part suppliers and other related companies in the Chinese province, promised further cooperation between the automaker and the Jiangsu provincial government. [HYUNDAI MOTOR]