Two years on, Samsung heir has put his brand on group

Two years on, Samsung heir has put his brand on group 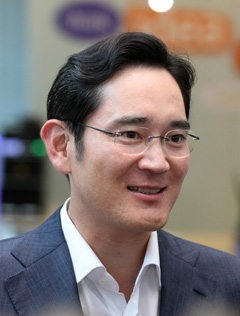 When Lee Jae-yong, the vice chairman of Samsung Electronics and de facto commander-in-chief of Samsung Group, decided to sell the historic Samsung Life Insurance building in Taepyeongno near Seoul City Hall for 580 billion won ($496 million) in January, the commanders of Korea Inc. were surprised.

Samsung founder Lee Byung-chull, the grandfather of Lee Jae-yong, had a deep affection for the brown, 25-story building that symbolized Samsung for decades. So did Jae-yong’s bedridden father, Lee Kun-hee.

“What Vice Chairman Lee did was something most cash-strapped companies would do only as a last resort, though Samsung is not in such a position now,” said a former Samsung executive who remains an insider in chaebol circles. “By proceeding with such an unconventional and bold move, the heir-apparent proclaimed his firm resolution to distinguish himself.”

Today is the second anniversary of Samsung Group Chairman Lee Kun-hee’s heart attack and long-term stay at Samsung Medical Center. It is an unwritten rule around Samsung to never bring up the condition of the bedridden chairman.

Reporters are perfectly free to ask about what the heir-apparent has been doing in the past two years - which has been a lot.

Through a selling spree and merger deals, seven companies have lost the Samsung logo, and the number of subsidiaries under the Samsung umbrella - except for nonprofit arms including foundations - has shrunk to 23.

With the selling spree, Korea’s top conglomerate has raked in an estimated 7 trillion won, a war chest to be used in the future for acquisitions or other kinds of corporate reshuffles.

Responding to the never-ending speculation about the fate of Samsung’s remaining subsidiaries, Kim Jong-joong, head of the future strategy office at Samsung Electronics, said in March that there will be “no more businesses to dispose of.”

He told reporters, “You may think [the business reshuffle at Samsung] has wrapped up.”

But many observers believe Kim deliberately omitted the phrase “at the moment,” and Samsung will continue to offload units throughout the year.

“Samsung has been tidying things up by disposing of construction, heavy industries and services in the past two years, and the electronics, finance and bio sectors have become key pillars,” said a professor of management at a Seoul-based university. “The upcoming business reorganization will be about Vice Chairman Lee’s own management succession and securing next-generation growth engines.”

Bio industries is a field that Samsung only recently concentrated on. Last month, its five-year-old contract drug manufacturing arm, Samsung BioLogics, announced it would list on the main Kospi exchange with the goal of becoming one of the world’s largest biologic drug producers by capacity.

The move by the 48-year-old Harvard Business School graduate is dubbed “choice and concentration” by Samsung watchers, as the younger Lee takes cautious yet closely monitored steps to move the nation’s most important business group in a new direction.

The foundation of Lee’s strategy, according to Samsung executives, is that even if a subsidiary is profitable at the moment, it should be pushed out of Samsung’s portfolio if it does not show potential to become its industry’s leader.

Analysts and media outlets have devised a variety of scenarios for how Samsung will transform itself. One of them is the much-anticipated shedding of the construction unit of Samsung C&T and financial companies Samsung Card and Samsung Fire & Marine Insurance.

The group will subsequently adopt a financial holding company structure with Samsung Life Insurance at the center. Talk of Samsung Electronics merging with either Samsung SDS or Samsung C&T is also common.

Corporate restructuring aside, the most critical part is whether Samsung Electronics, the core of the group, will be able to find the “next big thing.” Chinese players have caught up more rapidly than expected with Samsung products like the smartphone. 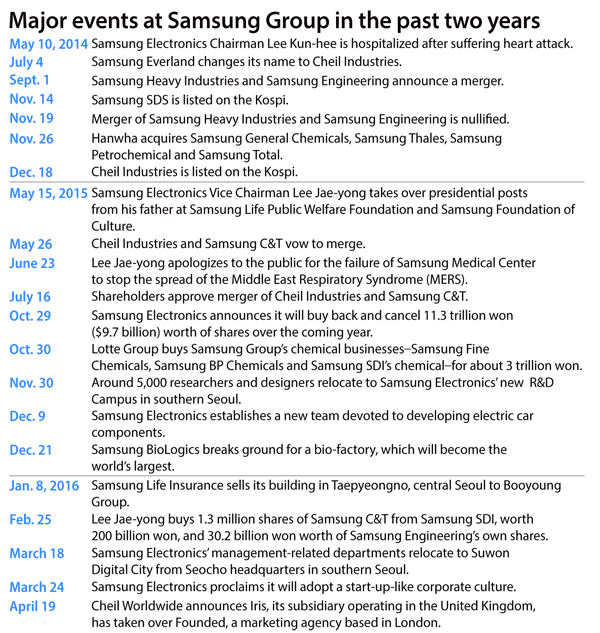 The tech giant announced last December it would re-enter the automotive business, which it gave up in 2000. This time, it will focus on supplying parts for connected and self-driving cars, following in the footsteps of tech rivals Apple and Google.

As Samsung seeks to break from its venerable reputation as a “fast follower,” the company has been scrambling to take the lead in creating an Internet of Things ecosystem and introducing virtual reality devices. The company is spending 15.6 trillion won through 2018 to build a new semiconductor production line in Pyeongtaek, Gyeonggi.

Some define Lee Jae-yong’s management style as “pragmatic,” citing the fact that the chaebol scion opted to sell three private airplanes and six helicopters his father used and carries his own luggage on business trips.

Some 250 billion won in cost savings have been achieved by Lee, according to Samsung. Employees have been relocated across different regions for efficiency’s sake.

Administration-related employees with Samsung Electronics, for instance, moved from its Seocho headquarters in southern Seoul to Digital City in Suwon, Gyeonggi, in March, where the manufacturing facilities and R&D workforce have been based.

Most recently, Samsung Electronics made public it would adopt a corporate culture closer to a start-up and move away from its decades-old top-down style.

Lee has yet to make any official comments that may define or even sketch an outline of his management philosophy. This is a contrast with his father, often called a disruptive innovator, who used to come up with ideas that were easily made into catchy slogans such as “quality-centered management” or “design-centered management.”

“It requires a much stricter yardstick to assess Lee Jae-yong’s qualifications as Samsung’s next leader than with his father back in 1987, when Samsung was one of two local conglomerates besides Hyundai,” said Shim Jung-taek, who recently published a critical biography of Lee Kun-hee. “Samsung is now a global entity.”