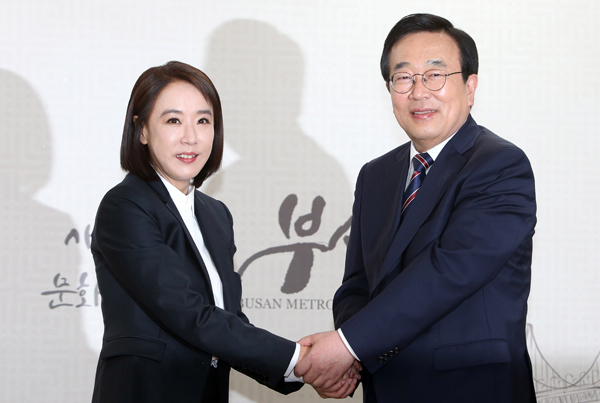 With six months remaining until the 21st edition of the Busan International Film Festival (BIFF), the host city and the festival organizer have finally come to an agreement on their long-standing dispute about the new leadership of the organizing committee.

Both sides agreed to appoint Kim Dong-ho as the new chairman of the organizing committee, which had been left vacant since Busan Mayor Suh Byung-soo (right) resigned from it in February.

The agreement was officially announced Monday after Suh and BIFF’s executive director, Kang Soo-youn (left), talked over the issue earlier in the day at Busan City Hall.

When Suh resigned from the post in February, he pledged to delegate the position, which has been automatically filled by the city mayor, to the private sector, in order to protect the festival’s independence.

However, during the past two months, the sponsoring city and the festival have clashed severely over who should sit in the empty post.

According to the press release distributed by the festival on Monday, Kim will “preferentially make amendments to the articles of association that are necessary to proceed with the upcoming Busan International Film Festival.”

The festival said it will hold an extraordinary general meeting later this month to make the needed revisions and elect Kim as the new chairman.

“The city of Busan and the Busan International Film Festival have finally taken a vital first step together today,” the festival said. “Now, the remaining task is to hold this year’s festival safely and complete the new articles of association. The new amendments will revolve around the newly appointed chairman, Kim Dong-ho, in order to satisfy cineastes, film fans and Busan citizens.”