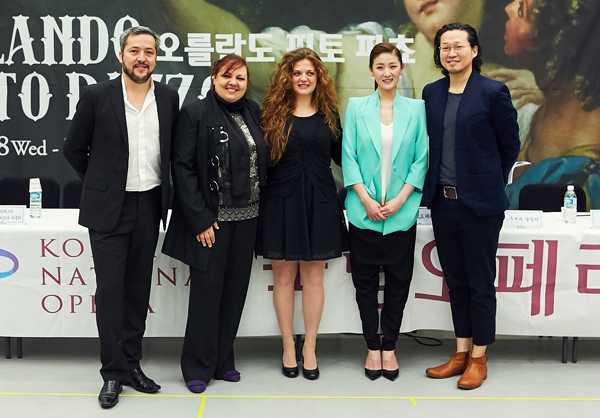 The Korea National Opera this month is staging the Asian premiere of “Orlando Finto Pazzo,” a Baroque opera composed by Antonio Vivaldi (1678-1741). The Italian opera is unknown to most people, even ardent fans of opera, as it is not performed often, even in its place of origin.

“Vivaldi wrote 94 operas but most of them perished - only 26 of them are left,” said Roberto Perata, who will conduct the performance. “In this sense, it is a great challenge for us to perform the opera here in Korea,” he said, adding that the national opera is trying its best to articulate the original music of the opera and to make it appealing to Korean audience. “Although there are cultural and time differences between the music and people nowadays, we hope to make people relate to the opera.”

The era of Baroque music is noteworthy in European classical music because it drastically improved in quality and quantity - Italy was the center of music and the birthplace of this genre of opera.

“Orlando Finto Pazzo” means “Orlando who acts crazy.” The opera is based on the epic poem “Orlando Innamorato,” written by Matteo Boiardo in the late 15 century. All seven characters love different people, and this complicated story of love, hate and magic will entertain the audience, said the artistic director and the head of the national opera, Kim Hak-min.

According to the national opera, experts on Baroque music have joined in the production. Maestro Perata, recognized for his understanding of composers of the era such as Henry Purcell, Claudio Monteverdi, George Handel and others, will take up the baton to perform with the ensemble Camerata Antiqua Seoul.

Fabio Ceresa, who won the Young Director Award at the International Opera Awards in 2016, will direct the opera. “I want to revive the emotions people had in 18th-century Italy,” he said at a press conference last Wednesday.

Other experts on choreography, costumes and stage design are joining the national opera for the upcoming performance.

In fact, the poem “Orlando Furioso,” which is the continuation of “Orlando Innamorato,” is better known to the public. Naturally, the opera of the same title gained more popularity than “Orlando Finto Pazzo” at the time it was composed.

For this reason, some skeptics doubt the potential success of the opera, pointing out that the opera itself is almost unknown to audiences not only in Korea but in Europe as well. After national opera head Kim said last year when he was inaugurated that he wanted to make opera more approachable to the public, the national opera will have to prove the show’s ability to capture people’s attention with the upcoming performance.

At the press conference, Kim addressed concerns, saying the upcoming opera has attractive music and a dramatic plot. “The theme of the opera also matches the social sentiment nowadays compared to those of the Baroque era, which often were concentrated on Greek mythology or praise of the king,” he said.

The performance is being held from May 18 to 21 at the LG Arts Center.