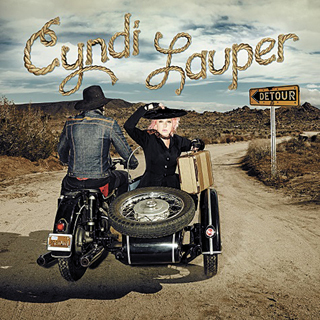 
Cyndi Lauper’s “Detour,” a trip into country territory after earlier forays into blues and pop standards, is all over the map, held together by her true north of a voice.

Lauper brings out her trademark hiccups on the opener, rockabilly queen Wanda Jackson’s wild and wacky “Funnel of Love,” which would have been a great fit on “She’s So Unusual,” her 1984 smash solo debut.

She tackles several country evergreens on her own, including a pair of Patsy Cline hits _ “I Fall to Pieces” and “Walking After Midnight” _ but sounds most at ease singing duets with giants of the genre, including the witty title track with Emmylou Harris.

Lauper refuses to take out the curlers but frees up her natural Noo Yakw accent with Vince Gill on “You’re the Reason Our Kids Are Ugly,” which is sure to draw a smile. Jewel’s yodeling on “I Want to Be a Cowboy’s Sweetheart” is also a hoot.

If the album’s artistic compass seems unsteady, Lauper’s splendid abilities as an interpreter are indisputable.