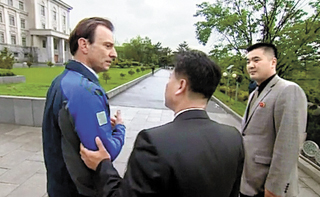 Rupert Wingfield-Hayes, far left, a BBC journalist, is interrupted by North Korean officials while shooting footage of a statue of Kim Il Sung, the state founder, on the campus of Kim Il Sung University in Pyongyang in a report on the BBC website. [SCREENSHOT FROM BBC WEBSITE]

North Korea expelled three BBC crew members on Monday after it found the network’s coverage of the country disrespectful and insulting to its people and leadership.

The BBC reported Monday that correspondent Rupert Wingfield-Hayes, producer Maria Byrne and cameraman Matthew Goddard were “being expelled from North Korea after being detained over their reporting.”

The three were reportedly stopped at the airport on their way out of the country by North Korean officials on Friday. Wingfield-Hayes was questioned for eight hours before signing a statement, according to the broadcaster. It did not specify what the statement said.

According to the Los Angeles Times, which has a reporter in Pyongyang for the seventh party congress, Wingfield-Hayes was taken to a hotel and questioned for hours before signing a “confession” on Friday. The two other crew members were taken to another hotel the same day and rejoined Wingfield-Hayes on Saturday.

The British broadcaster said the three-member team arrived in Pyongyang ahead of the Workers’ Party congress that opened Friday to cover a research trip by three Nobel Prize winners to Pyongyang, an event arranged by the Vienna-based International Peace Foundation.

The BBC said the North Korean leadership was displeased with Wingfield-Hayes’ coverage of the aspects of life in Pyongyang filed last week that involved a visit to Kim Il Sung University and interviews with the three Nobel Prize winners, one of whom expressed dismay at the extent of pretension by the state to showcase itself.

While it remained unclear what parts of the segment upset the North Korean officials, a look at reports filed from the reclusive state and posted online last week gives a clue on what North Koreans might have found to be enraging: footage of a statue of Kim Il Sung, the founding dictator.

In a video report posted Wednesday on the BBC website, Wingfield-Hayes was seen interrupted by North Korean officials while shooting footage of a statue of Kim Il Sung erected on the campus of Kim Il Sung University in Pyongyang.

“So our minders are now rather upset with us,” says Wingfield-Hayes. “Because we are trying to do a piece with a camera in front of a statue of Kim Il Sung here, and they clearly felt we said stuff that was not respectful to the great leader. And now we are in trouble.”

He goes on to say in narration, “We were told if we don’t delete the offending footage, we will not be allowed to leave the campus.”

This was followed by a scene of North Korean officials apparently discussing what to do with the footage.

In the same segment, Wingfield-Hayes interviewed Richard Roberts, who won the 1993 Nobel Prize for medicine, after he toured a computer lab on campus and talked to students and supervisors.

One scene showed him asking a supervisor why a student sitting in front of him was unable to connect to the Internet. The supervisor was visibly confused by the question and could not answer.

Roberts told Wingfield-Hayes that the sight of North Koreans pretending to have complete access to the Internet was “silly.”

In another report, Wingfield-Hayes questioned whether North Korean leader Kim Jong-un deserved to have won his revered position.

“What exactly he’s done to deserve the title marshal is hard to say. On state TV, the young ruler seems to spend a lot of time sitting in a large chair watching artillery firing at mountainsides.”

O Ryong-il, secretary general of the North’s National Peace Committee, was quoted by The Associated Press as saying that Wingfield-Hayes’ reports “spoke ill of the system and the leadership of the country.” O reportedly said Wingfield-Hayes wrote an apology and that he would never be admitted into the country again.

More than 100 foreign journalists were invited to the Communist state to cover the party congress, held for the first time in 36 years, but have not been allowed to enter the building in which it is taking place since Friday, the congress’ first day. Visiting journalists were instead taken to a factory named after Kim Jong-suk, the wife of Kim Il Sung, a maternity hospital, an electric factory and a children’s center on Monday.