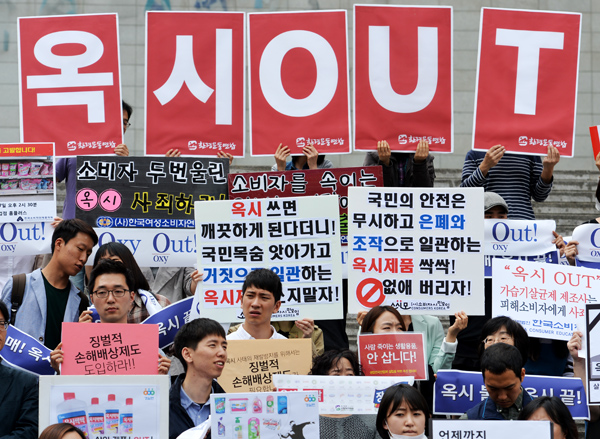 Some 100 members of environmental, religious, consumer and other civic groups call for a boycott of Oxy-brand products by Reckitt Benckiser Korea on the steps of the Sejong Center in Jongno District, central Seoul, on Monday. [NEWSIS]

The Saenuri Party decided to hold a National Assembly hearing on the humidifier sterilizer scandal that reportedly took more than 140 lives, but only after a prosecution probe is completed in order to prevent overlapping investigations.

The prosecution assembled a special investigations team early this year to investigate the humidifier sterilizer scandal and has since summoned key officials and researchers related to Reckitt Benckiser Korea, whose Oxy sterilizers reportedly caused the highest number of deaths.

“The Korean Centers for Disease Control and Prevention [CDC] first confirmed the danger of humidifier sterilizers in 2011,” said Chung Jin-suk, floor leader of the Saenuri Party, at a consultative meeting between the conservative party and the incumbent administration on Sunday. “For five years the government has failed to look into the deaths of infants and pregnant women, leaving the case unsolved.”

After the CDC’s initial confirmation, as many as 10 manufacturers have been sued by victims in 2012, but the prosecution still did not investigate, saying it was waiting for epidemiologic survey results from health authorities.

The prosecution then put a full stop to authorities’ investigations until 2014, when the CDC confirmed through its first epidemiologic survey that out of the 361 individuals who were included in the survey, 75 died from inhaling humidifier sterilizers. Police last year requested indictments against sterilizer manufacturers including Reckitt Benckiser Korea, and the prosecution put together a special investigation team early this year.

“The prosecution should try to ensure an airtight investigation that reveals every single fact of the case to the public,” Chung added.

“In order to avoid complicating the prosecution probe, the hearing and parliamentary probe will commence after the prosecution is done with the case,” said Kim Gwang-lim, Saenuri’s chief policy maker.

The incumbent administration reportedly agreed to extend the number of institutions examining users of humidifier sterilizers, conduct epidemiologic surveys not only on lung damage but of other organs, and consider extending financial compensation to victims in addition to medical funds.

“While the Saenuri’s response [to the humidifier scandal] is rather late,” said the Minjoo Party spokesman Lee Jae-kyung in a press release, “I see it as a turnabout in the party’s attitude.”

“The National Assembly should play its part while the prosecution plays its own,” Ki said.

The Minjoo Party on Thursday called for a three-party special committee at the National Assembly to investigate the humidifier scandal.

The Minjoo’s Rep. Yang Seoung-jo said the fact-finding committee should focus on finding out why it took so long for the prosecution to commence its probe after victims started filing lawsuits in 2012, and how products containing fatal chemicals escaped the radar of the Ministry of Trade, Industry and Energy, in addition to other details.