‘Red Wasps’ take the sting out of training

‘Red Wasps’ take the sting out of training

The women’s national hockey team was known in the 1980s as the “Red Wasps,” but the nickname wasn’t intended to be entirely flattering.

Wasps offer a painful sting, to be sure, but the nickname also referred to the team’s style of play, which involved chaotically running all over the field, according to former player Lim Kye-sook, who led the team to earn silver during the 1988 Seoul Olympics.

The team’s training methods were simple: run and gun. Practice sessions were so intense that Lim said many players “considered drowning themselves” just to avoid them. A little extreme, of course, but this essentially was how most Korean sports teams trained in the 20th century, with methods that now seem excessive at best.

As the Olympics approach, the women’s national field hockey team is relying less on brute force and more on sophisticated training strategies made possible by state-of-the-art technology.

At a recent practice session on April 25, players wore peculiar-looking black vests equipped with Global Positioning System (GPS) trackers and biometers. Based on the accumulated data from those vests, the coaching staff can analyze things like players’ movement patterns and stamina, and then use the results in making the roster for game day.

There are no regulations restricting the use of electronics in field hockey, which means the team can take advantage of available technology as much as it wants.

“The coaching staff can obtain live feeds of players’ biometrics including their movement, distance traveled, velocity and heart rate as well as details of a match such as number of passes and their success rates,” said Park Jong-cheol, a researcher at the Korea Institute of Sports Science (KISS). “The video tower also records the movement of opponents. The data from Korean players as well as videos of the opponents are sent directly to the tablet PCs of the coaching staff.” 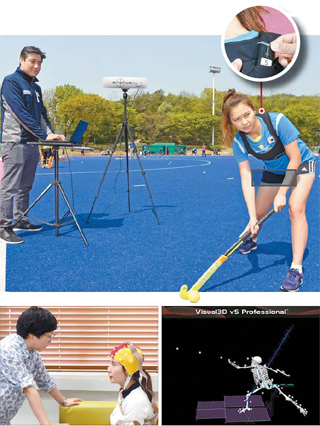 Top: Han Hye-lyoung, the captain of the Korean women’s field hockey team, trains with a black vest equipped with GPS tracker in the back. The device allows the coaching staff to accumulate various biometrics including movement, distance traveled, velocity and heart rate of a player as well as match details from past success rates. Bottom left: Korean archer Ki Bo-bae during a therapy session utilzing the “neurofeedback” technology. As archers require an exceptionally high level of concentration during competitions, the national team and coaching staff use the device to monitor the brainwaves of the athletes to enable them to find the sweet spot to maximize the level of their focus. Bottom right: The 3D motion capture system used by the fencing team allows the coaching staff to check the details of the movement of the fencers by creating omnidirectional evaluation during trainings and matches. [OH SANG-MIN]

“In the past, we had to rely on the information from past games to organize our tactics,” said Han Jin-soo, head coach of the women’s field hockey team. “Now, we can use the data provided by the technology we have at hand and can make spontaneous changes on tactics and players. They are also useful during set plays.”

“Players have it rough,” said the team’s coach Kang Keon-wook. “We can make a graphic for each individual player indicating their movement. When the lines tracing the movement of players are thinner, it means players slacked off and walked instead of running during practice.”

“It’s as if we are getting a report after each game,” said Han Hye-lyoung, the team’s captain. “We were often exhausted by the second half and we figured out from the GPS analysis that we run more than necessary during the first half. This enabled us to control our tempo. Data doesn’t lie.”

On the surface, Korea doesn’t seem to have the makings of a women’s field hockey powerhouse. There are only six semi-pro teams and five college teams in Korea, not to mention only 200 registered adult players.

But the national team began employing technology more regularly starting in 2014 and won gold at the Asian Games in Incheon that year to earn its eighth consecutive Olympics ticket. The team also advanced to the finals of the 2015 Women Hockey World League last June.

At this upcoming Olympics, the women’s field hockey team is hoping to get its first medal in 20 years.

The team’s success indicates that the best ally for the nation’s Olympics competitors is information technology (IT). This is being supported by the KISS-led “Rio Golden Project,” which began in August 2015 with a budget of 1.5 billion won. The project involves 30 researchers and now supports 11 events, including archery and fencing, to improve players’ performance through IT.

Archers require an exceptionally high degree of concentration, and Korea’s are some of the best in the world. But to help them improve their concentration even further, the national archery team decided to use “neurofeedback” technology, which allows them monitor the electrical activity in their brains and use that information to learn self-regulation and concentration.

“Archers can channel and create positive brainwaves on their own to shake off the anxiety and increase their level of focus.” said Kim Young-sook, one of the senior researchers of KISS.

Fencers are successfully using the same “motion capture” technology often used in the creation of 3-D movies or animations. After 60 to 70 sensors are attached to a fencer’s body, the system makes possible an omnidirectional evaluation of the fencer. Coaching staff can check the even the smallest movement of the joints and analyze even the exact degree of fencers’ striking motion.

Gymnastics, on the other hand, uses high-speed infrared filming technology to look at exactly how gymnasts muscles move in order to enhance movements like landings.