Does AlphaGo know the answer?

Does AlphaGo know the answer? 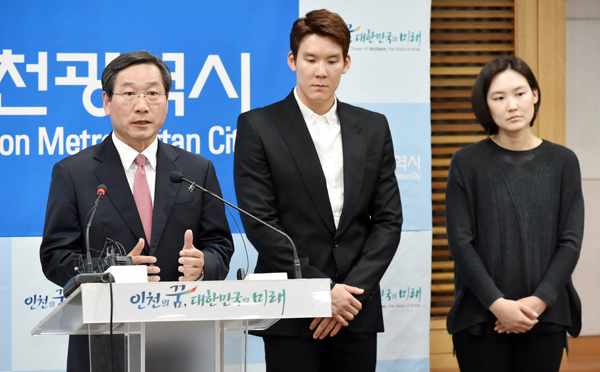 On September, 2014, swimmer Park Tae-hwan was tested positive for banned substances in a doping test, and the test was made public in January, 2015. International Swimming Federation (FINA) stripped him of the medals he earned in Incheon Asian Games and reprimanded him to an 18-month suspension. While the suspension ended in March, 2016, Park is not allowed to compete in the 2016 Olympic Games in Rio de Janeiro in August. According to Korean Olympic Committee’s policy, an athlete who tested positive for banned substances are banned to represent the national team for three years upon completion of the disciplinary action.

Less than three months to the Olympics, Park became a hot potato in the sports world. In the Donga Swimming Competition last month, the first competition after the suspension, Park won four events with satisfying records. On the last day of the competition, coach Roh Min-sang bowed on his knees and appealed. Some advised that Park may be able to compete in the Olympics by bringing the double punishment to the Court of Arbitration for Sport (CAS). Inchoen Mayor Yoo Jeong-bok and Doosan Chairman Park Yong-man led the public opinion, and Saenuri Party politicians backed the idea. A pollster claimed that a survey showed 70 percent of Koreans want Park to compete in Rio.

I first covered Park in 2004, when he competed in the Olympics in Athens. I watched him being disqualified for a false start in the preliminary heat on television from the news room. In 2008 in Beijing, I was at the scene of Park winning a gold medal in 400-meter freestyle and a silver in 200-meter freestyle. The triumph was overwhelming. Four years later, I met him again in London. He won two more silvers. It is only natural that we don’t want to see our swimming hero go, just as Incheon Mayor Yoo Jeong-bok said. It may be easier for me to write about why he should go to Rio. But I may have to veto the idea.

Park’s doping case is in the appeal process. But the trial leaves some doubts, and the focus seems to be off the essential nature of doping. Various allegations raised in the early stage are not cleared. Also, I wonder why the Korean Olympic Committee policy that raised a “double jeopardy” controversy became an issue at this point. This policy was made in July, 2014. Sports insiders say that the background is dubious. Back then, an athlete with a history of doping was about to join the national team, and while the athlete was renowned in the field but had an uncomfortable relationship with the Korean Olympic Committee. While the issue of double punishment was raised, the committee pushed for the policy to prevent him from returning to sports. Careers of many other athletes who are not as well-known as Park Tae-hwan couldn’t argue and had to perish because of this policy.

The climax of swimmer’s career is said to be around age 24. Park is 27. He may or may not be able to win medals in Rio. I am not sure Park should be banned from competing even when he changed the history of swimming in Korea. My mind and heart are going opposite directions. Does AlphaGo know the solution?


*The author is head of JTBC digital newsroom.