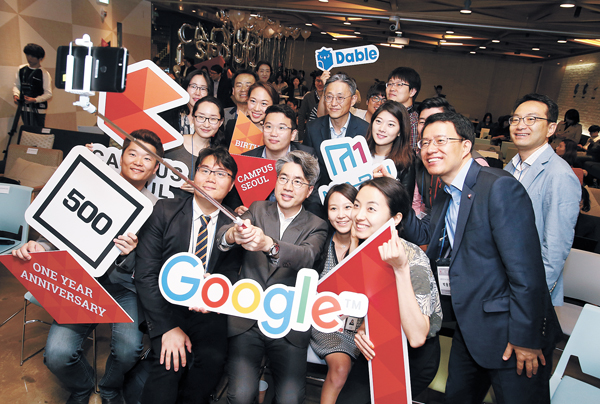 Jeffrey Lim, head of the Google Campus Seoul, center, takes a selfie with entrepreneurs and staff after a press conference at the campus in southern Seoul on Tuesday. [GOOGLE KOREA]

The Google Campus Seoul, a Google-operated community for fledgling entrepreneurs, celebrated its first anniversary on Tuesday. The center has helped 16 companies on their way to accumulating 12.1 billion won ($10.3 million) in funds since its opening.

The campus, the first of its kind in Asia and third in the world, has attracted over 13,000 members from some 80 countries and has hosted about 450 events for people who want to launch or already operate start-ups, including mentoring programs, recruiting sessions and demo days. It is located in an office space in the basement of a building in Daechi-dong, southern Seoul.

The campus has successfully incubated nine start-ups that have now gone independent, and seven others are being hatched there.

“Start-ups are not part of the economy but represent the future of Korea,” said Jeffrey Lim, head of the Google Campus Seoul, at the ceremony celebrating the first anniversary. 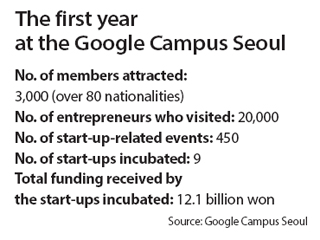 “Our goal has been and will be about gathering the attention of entrepreneurs, investors and angels from across the globe to Seoul so that the capital will become a start-up hub some day. Under the best-case scenario, those start-ups could be taken over by more competitive companies with our aid.”

Anyone can register as a Google Campus Seoul member for free. They can participate in the sessions, make friends, recruit business partners and brainstorm their latest business ideas.

What distinguishes the campus from other start-up communities in Korea is its focus on diversity, particularly female entrepreneurs. It has reserved space devoted to child care and has been running programs to support moms who wish to work at their own business after having their career cut short due to family commitments, but have few resources.

The first batch of the “Campus for Moms” program, initiated last July, had 22 participants, and 15 have either launched a business or are preparing to do so. Some 30 are in the second batch that is currently underway.

Choi Jeong-yoon, co-founder of MOI Arts & Entertainment, a start-up that links Korean entertainers with dozens of media outlets in Hong Kong and China to help their promotion, was one of the first beneficiaries of the program.

“The campus allowed moms to participate in the program with children, and we were able to exchange the latest information, build a team with resourceful members and receive priceless mentoring from top-notch experts,” said the mother of a 4-year-old daughter.

Marking the first anniversary, the Google Campus Seoul is set to run a new program called “Google Global Expert Week,” in which Google employees with expertise from around the world will be staying at the Seoul campus for two weeks from June 13 to help out hopeful entrepreneurs.