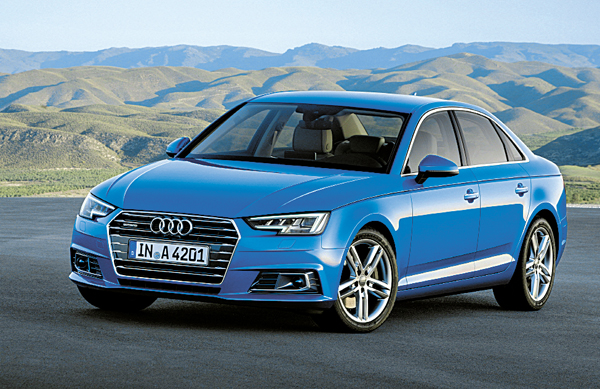 Audi Korea rolled out its all-new entry-level A4 sedan on Tuesday, the first revamped model in eight years. It is bigger but lighter, and aims to make a larger impact on the nation’s sedan market.

The new ninth-generation car has a 2.5-centimeter (0.98-inch) longer body and 1.6-centimeter longer wheelbase providing a wider interior space than competing models in the category.

By adjusting its body material composition to a combination of steel and aluminum and changing other auto parts to aluminum the model weighs in at 100 kilograms (220 pounds) lighter than its preceding model. The lighter weight pushes the car’s fuel efficiency up to 12.5 kilometers per liter from 10 kilometers per meter, the company says.

The models introduced in the Korean market are the “New Audi A4 45 TFSI” and “New Audi A4 45 TFSI quattro”. Both have turbocharged 4-cylinder engines and seven-speed dual clutch transmission. The quattro model has a full time four-wheel drive system developed by Audi, with more precise steering and cornering.

The basic New Audi A4 45 TFSI model has 252 horsepower with a maximum 38.0 kilogram-meter (274 foot-pound) torque. The car can accelerate to 100 kilometers per hour (62 miles per hour) in 6.3 seconds, 0.6 seconds faster than the previous generation model.

The car comes with a gasoline engine while diesel models have been released in Germany. “We are planning to introduce the diesel model as well but we had supply shortages even in Germany and so we are waiting for the right timing for its entry in the Korean market,” a spokesman said.