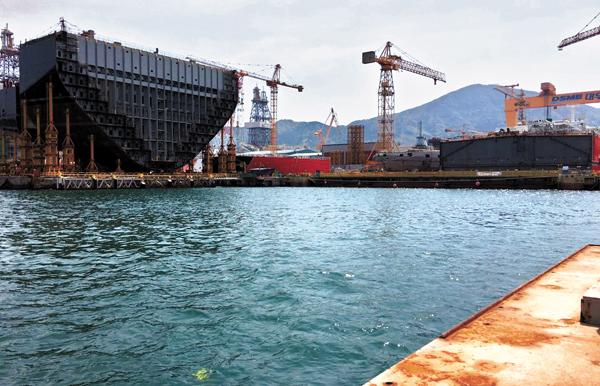 A shipyard of Daewoo Shipbuilding & Marine Engineering in Geoje, South Gyeongsang, is empty as the shipbuilder won no orders in April. [JOONGANG PHOTO]

The golden age of the Korean shipbuilding industry appears to have long since lost its glow. Korean shipbuilders, who once dominated the global market, received zero orders in April, according to the British maritime researcher Clarksons Research Services on Tuesday.

Out of the 31 orders placed in April worldwide, 18, or 48 percent of the total, went to Chinese shipyards. Ten orders came from Chinese companies that wanted bulk vessels to be made in China. The Japanese obtained two orders in the same month, whereas Korean shipbuilders, already facing government-led corporate restructuring measures, including layoffs amid ever-declining revenue and profit, failed to get so much as one. In March, China earned 26 orders, Korea received six and Japan got zero.

But it is unprecedented that the top three Korean shipbuilders - Hyundai Heavy Industries, Daewoo Shipbuilding & Marine Engineering and Samsung Heavy Industries - would obtain no orders for an entire month. Since 2000, they have maintained some 100 new orders per quarter, and order backlogs held by shipyards will keep them busy for a while, but should the current pace persist, almost half the docks will be vacant by year’s end. 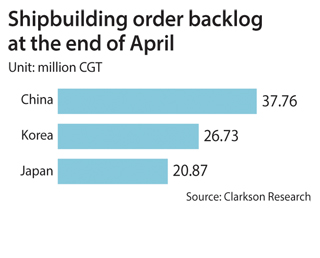 The three companies currently have 52,000 employees, and the number of workers at partner businesses amounts to 200,000.

The first four months of this year have been harshest for the shipbuilding industry as a whole, which has recently grappled with tumbling oil prices that, in turn, sapped global demand for tankers and offshore drillers and led to an oversupply of vessels.

Accumulated orders placed on all shipbuilders totaled 114, which is equivalent to 3.89 million in compensated gross tonnage (CGT), or one-third the volume for the same period last year. Still, China grabbed 49.3 percent of the pie during the first quarter, while Korean shipbuilders merely managed to account for 5.1 percent. Japan’s share was 5 percent.

Weighing on the already troubled shipbuilders is the fall in prices for vessels. Very large crude carriers had their price tag drop $500,000 in April from a month earlier, and the price for container vessels was slashed by $1 million over the same period.