Kim Jong-un is made chairman of Workers’ Party

Kim Jong-un is made chairman of Workers’ Party 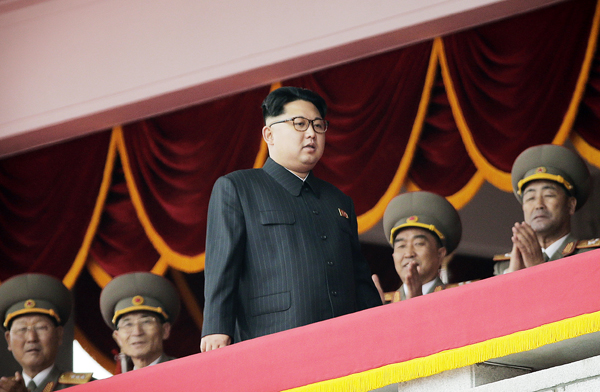 North Korean leader Kim Jong-un, center, watches a parade from a balcony on Kim Il Sung Square on Tuesday in Pyongyang. Hundreds of thousands of North Koreans celebrated the country’s newly completed congress of the ruling party with a massive parade featuring floats bearing patriotic slogans and marchers with flags and pompoms. [AP/NEWSIS]

North Korea on Monday named Kim Jong-un as chairman of the Workers’ Party of Korea (WPK), in a move to further cement his grip on power.

Kim’s appointment came on the last day of the Communist country’s biggest political gathering, held for the first time in 36 years, with over 3,000 participants unanimously supporting the motion.

Kim’s new title came four years and five months after he took power following the death of his father, Kim Jong-il, in a third-generation dynastic succession.

“With full support of all party members and congress participants, I respectfully propose to have Kim appointed as chairman of the Workers’ Party of Korea,” said Kim Yong-nam, president of the Presidium of the Supreme People’s Assembly, on Monday at the April 25 House of Culture in Pyongyang.

Kim Yong-nam’s proposal was met with thundering applause from party delegates and members who had taken part in the congress since Friday.

While Kim Jong-un was already the most powerful person in the state and bore many titles - including first secretary of the WPK, first chairman of the National Defense Commission and supreme commander of the Korean People’s Army - his new appointment of party chairman took his authority to a new high.

Other than Kim’s new title, the WPK promoted the party secretary, Choe Ryong-hae, and the cabinet prime minister, Pak Pong-ju, to the presidium of the WPK central committee’s political bureau, which used to have three members: Kim Jong-un, Kim Yong-nam and Hwang Pyong-so.

Choe’s restoration to the highest decision-making body of the party is seen as his return to the power circle after a period of hardship last year. He was reported to have been sent to the countryside for ideological re-education late last year in a tumble from power.

Lee Woo-young, a professor at the University of North Korean Studies in Seoul, said Choe’s entry shows the North’s continuing sharing of power with descendents of the first generation of North Korean guerilla fighters, known as partisans.

Choe is the son of Choe Hyon, a Kim Il Sung loyalist who fought alongside Kim as a guerilla fighter against the Japanese.

“Choe’s promotion is an affirmation of the strong position still maintained by sons of North Korean partisans in the power circle,” Lee said. 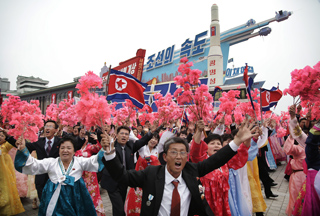 North Korean parade participants wave decorative bouquets of flowers and carry their country’s national flag as they march with a model of the Unha space launch vehicle on Kim Il Sung Square in Pyongyang on Tuesday. [AP/NEWSIS]

Kim Yo-jong, the younger sister of Kim Jong-un, was placed on a 129-member roster for the WPK’s central committee, in what is seen as her debut on the central political stage at age 29. She has been serving as vice director of the Propaganda and Agitating Department under the WPK, which is responsible for the cult of personality surrounding her brother and for showcasing the isolated country.

“The sister Kim Yo-jong’s debut into the political process was expected,” Lee said. “A power structure centered around one person like Kim’s requires a backup plan [in case of an emergency], and the task of executing such a plan usually falls on a relative.”

Lee noted that Kim Jong-un would not bestow any official position on his older brother, Kim Jong-chol, whose name was not seen on any roster made public Tuesday. By virtue of his age alone, he could emerge as a potential challenger to Kim Jong-un’s authority.

North Korean Foreign Minister Ri Su-yong was named one of 19 political bureau members under the WPK central committee. Ri is known as a former guardian of Kim Jong-un and his sister Kim Yo-jong during their study-abroad years in Switzerland in the 1990s.

With the addition of Ri and eight other members, the number of political bureau members of the party’s central committee rose to 19 from 10.

Nine officials were named alternate members of the WPK central committee’s political bureau, including Ri Yong-gil, a former chief of the North Korean Army’s general staff who was said to have been executed on charges of corruption earlier this year by South Korean officials. Ri was also named to the party’s central military commission.

A government official said Tuesday an earlier assessment that Ri had been executed appeared to have been incorrect. “There are many types of purges [in the North], and it appears that Ri was given a new task after some time off [in some kind of purge],” the official said on the condition of anonymity.

Kim Kyong-hui, the aunt of Kim Jong-un and wife of Jang Song-thaek, who was executed by his nephew in late 2013, was not on the roster of the 19-member political bureau of the WPK central committee. Kim Kyong-hui was part of the political bureau as late as 2013, when it had 10 members. She was last seen publicly in September 2013, shortly before Jang’s death in December 2013.

The party’s central military commission accepted three new faces, including the cabinet prime minister, Pak Pong-ju, who was also named as one of the five presidium members of the political bureau of the party’s central committee.

The North, however, excluded seven existing members from its roster and made the commission a 12-member body. The fact that Pak entered the party central military commission raises speculation that its status and influence within the party will increase.

During the rare four-day political event, Kim made clear he had no intention of giving up the country’s nuclear arsenal despite international sanctions, and said his country would continue to pursue a so-called byungjin policy that calls for pushing forward nuclear development and economic development at the same time. The party changed its charter to declare its dual-track policy on the last day of the congress, as expected by analysts.

“The decision adopted by the party added a clause in the party charter affirming the dual policy for nuclear defense and economy development,” the state-run Rodong Sinmun reported Tuesday.

While Kim made a conciliatory gesture toward Seoul at the congress by proposing military talks to ease tensions along the border, the South Korean government brushed it off as “lacking sincerity,” citing Kim’s avowal of his nuclear ambitions.

“The government sees it as nothing more than a propaganda campaign to make such overture while it remains unchanged on the nuclear issue,” a South Korean government official said Tuesday. The official said the government saw Kim’s proposal for military talks not as an official proposal but rather as Kim’s general position on future inter-Korean relations.

The North Korean media reported Tuesday that Chinese President Xi Jinping sent a message of congratulations for the event.

According to the state-run Korean Central News Agency, Xi remarked that the traditional friendship between the two allies had been “cultivated by the leaders of the elder generation of the two countries with great care” and called it a “precious asset common to the two countries.”

Relations between the two countries have grown chilly after Pyongyang ignored Beijing’s repeated warnings against nuclear tests. Of four nuclear tests North Korea has undertaken, two were conducted by Kim Jong-un in 2013 and last January.

Some observers saw Xi’s message as a sign of approval from Beijing that Pyongyang did not go ahead with a fifth nuclear test, which the North was expected to carry out to mark the congress.

Commemorating the end of the seventh party congress, the North held a massive rally in the heart of Pyongyang on Tuesday morning, which was broadcast live by Korean Central Television. Kim Jong-un presided over a parade in a traditional party uniform, not the Western-style suit he wore during the four-day congress.

Kim Yong-nam signaled the beginning of the rally by shouting, “Manse to the great leader of the Workers’ Party of Korea, dear comrade Kim Jong-un!” before thousands of rally participants at Kim Il Sung Square. Manse means “hurray” in Korean.