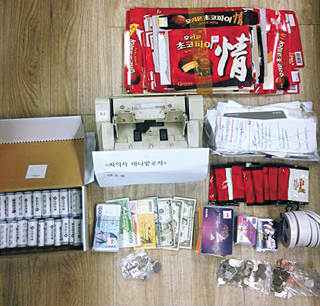 Three Filipinos and one Korean were arrested by police for trying to smuggle about $12 million to the Philippines by hiding them in Choco Pie foil packages, said the Seoul Metropolitan Police Agency’s tourist police branch on Monday.

Police arrested two Philippine nationals, a 40-year-old who directed the undertaking and a 32-year old in charge of transporting the currency. Police also booked a 39-year old Filipino and a 57-year-old foreign exchange trader from Korea without physical detention.
The group smuggled an average of $17,000 per year since 2009, said the police, adding that most of the money was in the form of remittances from illegal immigrants, since they couldn’t use banks to transfer the money back to their home countries.

The smugglers used Choco Pie packages because these are widely available and because they are made of foil, which partially attenuates the X-rays used by luggage detectors in airports. They enclosed a maximum of $3,000 in each package, in 100-dollar bills, and typically sent them via cargo airplanes.

The Filipino who directed the operation pocketed commissions totaling about 3 million won ($2,560), and sometimes up to 4 million won, every month, depending on the exchange rates, the amount of remittances and the risk fee he charged.

An illegal immigrant, he first came to Korea in 1996 as an industrial trainee and, after his visa expired, has since been using mobile phones and alien registration certificates enlisted under other people’s names in order to avoid detection by the police.