Spain game on Stielike’s mind, even on golf course

Spain game on Stielike’s mind, even on golf course 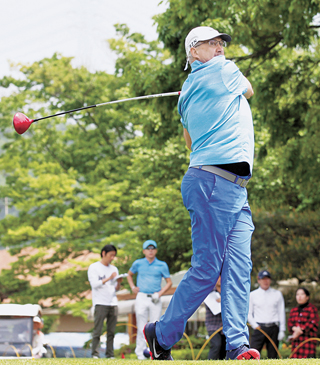 National football team manager Uli Stielike isn’t spotted too often outside a football stadium, and it’s even more unusual to find him on a golf course.

But Stielike joined other distinguished football personnel, such as Cha Bum-kun and K-League managers, to play a friendly round of golf on Monday at the Gold Country Club on the outskirts of Seoul in Yongin, Gyeonggi.

And even as he was on the green swinging his club, his mind lingered on the upcoming friendlies against Spain and the Czech Republic, slated for June 1 and June 5, as well as the final round of regional qualifiers for the 2018 World Cup.

“This is my first time playing golf this year,” smiled Stielike. “I think it’s the weather and I feel good.

“Golf is a sport played in nature. I can forget everything else when I’m playing golf,” added the German-born manager.

But still, Stielike can’t get his mind off his national team manager duties. Even during the tee shot, his mind was pondering how to approach upcoming matches. “The friendly against Spain will be a good opportunity to test our capacity,” said Stielike.

Stielike has been adamant about playing against some of the elite European teams, even if it means a crushing defeat. “It will give our players a good experience,” he said about the match against Spain.

There is the added expectation that regardless of the result, the game itself will be an outstanding motivator for the national team players, with World Cup qualifiers around the corner. “Many star players will be excluded from the Spanish roster on June 1,” said Lee Yong-soo, Korea Football Association (KFA) technical committee head. “But still, the Spanish team is a football powerhouse. They will be a good sparring partner for our team.”

The reason behind Stielike’s obsession with the two friendlies is simple: the final round of the regional qualifiers for the World Cup is imminent.

“We are in a tough group in the final qualifiers,” said Stielike. “No doubt the competition will be fierce.

“Qatar is a team with vision and Uzbekistan and Iran are also expected to be a tough challenge. On top of everything else, I am quite worried about our players in Europe not being able to get much time on the pitch recently including Park Joo-ho of Borussia Dortmund, Kim Jin-su of TSG Hoffenheim and Lee Chung-yong of Crystal Palace.”

Ki Sung-yueng of Swansea City and Son Heung-min of Tottenham Hotspur have given the manager some good news recently by scoring goals over the weekend. “Encouraging news,” said Stielike.

Lee said Stielike has been keeping an eye on players in Europe who haven’t had much playing time. “He’s not just trying to sympathize with the players but he’s been making contact with their agents,” he said.