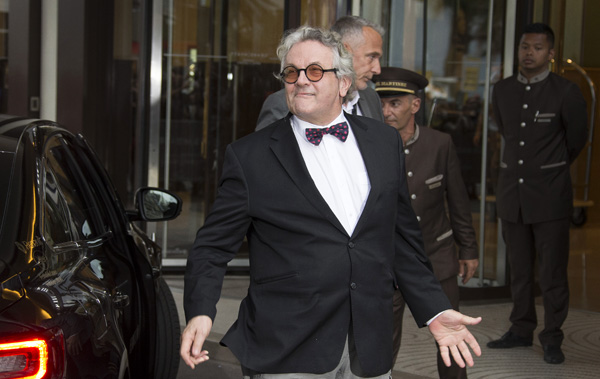 
CANNES, France - Coming six months after the Paris attacks in November, the 69th Cannes Film Festival has elevated security measures, swarming the French Riviera resort town with an increased police presence. But particular care has been paid, festival organizers say, to preserving the spirit of the annual cinema celebration.

Bomb sweeps and bag checks have been stepped up. A dramatic, unnerving drill was held last month in which mock gunmen stormed the festival’s palace hub. And festival president Pierre Lescure has said that about 500 highly-trained security agents will be on guard around Cannes’s red-carpeted headquarters, the Palais des Festivals. That’s in addition to around 200 police and extensive surveillance cameras throughout Cannes.

But the festival, which opens Wednesday, has also sought to counter the heightened state by continuing with business as usual. The party will most definitely go on.

“The atmosphere is good,” festival director Thierry Fremaux said in an interview Tuesday. “Cannes is a celebration of life, of cinema.”

“These films have a big fighting spirit,” he added. “This is also what makes Cannes and we still want to show that.”

Perhaps signaling that maintaining such a balance will have its difficulties, moments after Fremaux spoke, alarms rang out inside the Palais, forcing an evacuation.

But on the eve of Wednesday’s opening festivities - including a new “welcome party” for festivalgoers on the beach - beefed up security was far from omnipresent. The most striking change, as many noted, weren’t security agents but a wardrobe change for the ubiquitous festival ushers. To glowing reviews from critics, their traditionally beige suits have been replaced with blue ones.

“The French public statement was very clear, is very clear,” Fremaux said. “The festival is as usual, the same way as usual, so everything will be fine.”

That was consistent with earlier statements made by Lescure, who pledged that “the maximum” has been done to balance security and ensure “that the festival remains a place of freedom.”

Others have emphasized that Cannes, the world’s pre-eminent film festival, must be diligently guarded.

“We must keep in mind as we prepare to open this festival that we are faced with a risk which has never been as high, and faced with an enemy determined to strike us at any moment,” French Interior Minister Bernard Cazeneuve said Monday in Cannes.

“We must demonstrate extreme vigilance at all times,” he said.

Security was also increased last year following the Charlie Hebdo shooting in January 2015. But after 130 were killed in the Paris attacks, France remains in a state of emergency.

“Cannes must be protected not because of the cocktail parties, but because it is a professional event of a high level which brings honor to France,” Mayor David Lisnard said.

Traditions rigorously guide Cannes, which runs through May 22, culminating with the presentation of the Palme d’Or. Onlookers will be paying close attention to see if the customary pageantry of the festival red carpet changes even slightly.

Outside the Palais on Tuesday, festivalgoers voiced support for any necessary security measures.

“We can’t stop doing things just because there is potential danger,” said Cecil Brown of Paris. “We will just continue.”

Robert Willington of Cannes asked, “What, we should stop having concerts and playing music and enjoying ourselves and doing what we love? I don’t think so.”