‘Hello Jadoo’ creator says the character grew with her

‘Hello Jadoo’ creator says the character grew with her 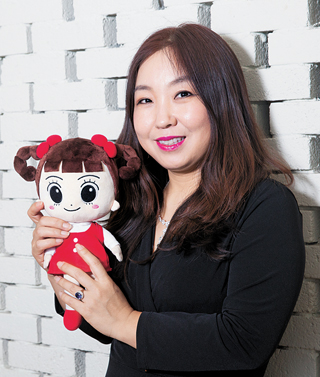 The JoongAng Ilbo talked to Lee Bin, the original creator of the “Hello Jadoo” series.


Q. What do you think about the movie “Hello Jadoo?”

A. I wrote romance cartoons originally. “Hello Jadoo” is actually like an essay to record my own childhood, so I didn’t expect it to be turned into a movie. Lee Jin-hee, the CEO of Atoonz, cared for this animation very much.

You started drawing the cartoon series when you were in your 20s, but now you have an 11-year-old son. Did your cartoons change along the way?


Since you said the cartoon is also a personal record of your childhood memories, are you especially attached to the series?

I feel like my parents are still with me when I draw the cartoon, even though they already passed away.

In the past, whenever I asked my mom to buy me something, she always said, “You’ll have to sell me first and then buy it.” I wrote that in my comic series, and my family told me that the character resembled my mom.


If the series is made into another movie, do you have any story in mind?

I am designing a prequel series for the movie right now. In the story, Jadoo and her mom experience time travel and go to each other’s childhoods. I also liked stories of princesses who had magical powers such as “Minky,” so I think that a special trial to make Jadoo a magical princess would also be interesting as well.


How long are you planning to continue making “Hello Jadoo?”

As long as I can, so I hope many people will come to see the movie.