The office and headquarters of Yuanta Securities in Myeong-dong, central Seoul, on Wednesday. After a failed attempt 10 years ago, the Taiwanese brokerage finally entered Korea by buying Tongyang Securities in 2014. The acquisition is now considered as a successful foreign financial investment. [PARK SANG-MOON]

It was not the first attempt by the Taiwanese brokerage to buy its way into the Korean market. In 2004, Yuanta bid for LG Investment & Securities - and almost made it to the final round.

There was skepticism about the entry of a Taiwanese financial investment firm, with good reason. In 2000, Taiwanese conglomerate Koos Group bought a 51 percent controlling stake in Chohung Securities, operated it under the name KGI Securities - and then pulled out in just five years.

But in the almost two years since Yuanta Securities came to Korea, it is considered a success story.

“Even among employees, there were some doubts as to whether a foreign company would be able to make it in the local market,” said Yang Gap-yeol, a public relations officer at Yuanta Securities.

Yuanta Securities’ success in Korea is a glimpse of a paradigm shift in the financial landscape, as financial institutions from emerging markets like China and India have started aggressive expansions into Asia’s fourth-biggest market.

The Chinese bank’s expansion has been going at an impressive rate since Korea and China’s free trade pact went into effect last December.

Total assets of five Chinese state-run banks in Korea rose an average 55 percent annually since 2010, a lot faster than other foreign banks, whose total assets expanded by an annual average of 3.3 percent during the same five-year period, according to a Woori Finance Research Institute report.

As of last September, ICBC was the largest of the Chinese banks, with total assets of 20.95 trillion won and equity capital of 936.3 billion won as of the first half of last year.

ICBC, which entered Korea in 1993, does business with Korea’s top 30 conglomerates, which includes financing exports and imports as well as consulting on business expansion in mainland China.

“Major state-run Chinese banks started out small in Korea by opening offices since the early 1990s, but their expansion accelerated recently with the bilateral free trade agreement initiatives,” a banker at one of the Chinese banks said on the condition of anonymity. “Some express concerns that the growth of our profitability has slowed lately due to the drastic weakening of the renminbi, but I think the banks will keep showing firm growth in the future, as the economic reliance between the two nations is deepening.”

Opening of a won-yuan direct exchange trading market in 2014 and the yuan’s entry into the basket of special drawing rights currencies by the International Monetary Fund in late 2015 are two big factors that have accelerated currency transactions, making Seoul branches busy and profitable.

“Once the international influence of the renminbi strengthens in the future, having a branch in Seoul would be considered quite significant.”

Financial transactions with China will grow well beyond currency trading and into bonds and renminbi futures as the Chinese central government opens its capital markets, wrote Kim Kyung-hoon, another researcher at the Woori institute. 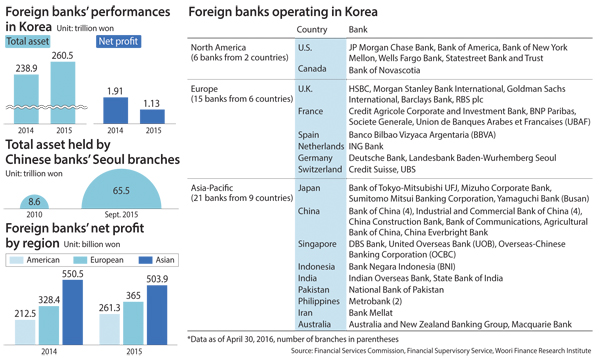 ICBC now has three branches in Seoul and one in Busan. The two smaller offices in Seoul are located near Daerim Station and Konkuk University Station, each in areas with heavy Chinese populations.

The branches are expanding into retail finance to target the foreign population in Korea.

In February, ICBC introduced a dual-currency debit card jointly with Samsung Card, through which Chinese nationals can make payments in won when spending in Seoul and in renminbi when spending in Beijing. The card initially targeted Chinese or Korean businessmen who often travel between the two countries. Nearly 30,000 cards have been issued, according to the bank.

SBI, the largest Indian state-run commercial bank, plans to lend for project financing or regular business projects between Seoul and New Delhi, and assist trading transactions for exporters. When it comes to retail finance, it offers same-day wire transfer services for Indians working or studying in Seoul.

The bank also cooperates with the Export-Import Bank of Korea to jointly finance Korean firms when working on state-led plants or infrastructure construction projects in India.

“We play a role of syndicator to businesses between Korea and India,” said Lee Sung-moon, a deputy head of the SBI Seoul branch. “We entered Korea to meet the demand after the free trade pact [the Comprehensive Economic Partnership Agreement, which went into effect in 2010] with Seoul.

Northern Trust, a U.S.-based financial group, is currently preparing to obtain a business license, according to the Financial Services Commission.

Analysts say the expansion of financial companies from emerging markets reflects changes in the Korean economy, where trade with emerging markets has been increasing. China is the largest trading partner of Korea.

“In the past, when the United States and European nations were Korea’s top trade partners, financiers there entered Seoul seeking profits,” Lim Hyung-seok, a senior research fellow at the Korea Institute of Finance, said. “It’s natural to see the number of Western financiers shrink and financiers from emerging economies expand operations here, as Korea now relies heavily on trade with China and Southeast Asian nations.”

There are growing concerns about financial companies from Western economies either scaling back operations in Korea or packing up entirely as their profits shrink.

“Foreign financial companies have no choice but to move according to profits and growth potential,” said Ha Yung-ku, chairman of the Korea Federation of Banks and former head of Citigroup Korea.

Since the beginning of the year, British financier Barclays decided to pull the plug on its Korean operations, which have been going since 1977. The reason was increasing losses.

In 2014, the British bank is estimated to have suffered a net loss of 18 billion won from its local securities business, even though its banking business enjoyed a 9.6 billion won net profit.

The Royal Bank of Scotland (RBS) is pulling out of Korea, trying to sell assets to other players and downsizing staff after first announcing the decision last March.

According to the Korea Financial Investment Association, operating profits of 17 asset management companies last year amounted to 4.5 billion won. This was 400 million won less than in 2014.

Franklin Templeton is said to have suffered a 1.8 billion won loss, while Fidelity suffered a similar loss.

The exodus of Western companies has raised concerns over Korea’s goal of becoming a financial hub in Asia like Hong Kong and Singapore.

Lim Hyung-seok, a senior research fellow at the Korea Institute of Finance, emphasized that the recent scale-back by Western companies in Korea doesn’t necessary mean the Korean financial market is unattractive.

“Many European and North American financiers have gradually reduced operations here or pulled out largely due to issues at home, including strengthened capitalization and deleveraging requirements they faced after the 2008 global financial meltdown and shrinking profitability across branches globally,” Lim said.

Woori Finance Research Institute’s Kwon said Western financiers may minimize the withdrawal of operations in Seoul as there is a possibility that Korean regulators may not grant business licenses if they try to re-enter the market.

The Korea Institute of Finance’s Lim said the government could use licenses as a bargaining chip to help Korean financiers expand globally. If a foreign bank wants to return to Korea, maybe its government will be persuaded to give the green light to a Korean bank.