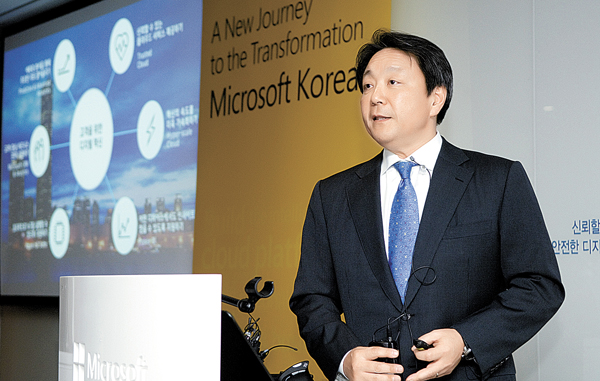 Microsoft Korea announced on Wednesday it would launch several Azure-branded data centers in Seoul and Busan early next year as part of its cloud expansion plans. The company refused to provide exact numbers, locations and their size.

Existing users of the Azure cloud and Office 365 platforms in Korea will be able to enjoy more stable and quicker services, the company said.

The announcement came as other global cloud powerhouses such as Amazon Web Service and Google Cloud Platform have scrambled to offer services in Korea, a promising market for the Internet platform.

“This latest investment is further proof of Microsoft’s commitment to empower customers to embrace a cloud-first world on their terms,” wrote Takeshi Numoto, corporate vice president of marketing for Microsoft’s Cloud & Enterprise business, in a blog post, “and is expected to accelerate public and hybrid cloud adoption within Korea.”

Koh Soon-dong, the new CEO of Microsoft Korea, made his official debut with the media on the same day through a press conference at the company’s office in central Seoul.

Koh was inaugurated on Feb. 15. He spent the past 33 years at IBM and Samsung SDS as a marketing expert. The CEO post at Microsoft was vacant for eight months before Koh’s arrival.

Koh graduated from Yonsei University with a bachelor’s degree in business administration and earned a master’s degree in corporate finance at the business school of Washington University in St. Louis.