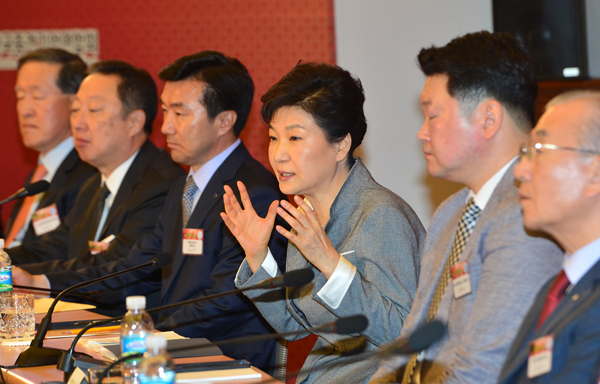 President Park Geun-hye, third from right, explaining the results of the economic missions she made during her recent trips to Mexico and Iran at the meeting with the country’s top five business lobby groups held at the Korea Chambers of Commerce and Industry’s headquarters in Seoul on Wednesday. [JOINT PRESS CORPS]

In response to recent doubts raised over the tangible outcomes of President Park Geun-hye’s economic missions to Iran and Mexico, she and five major business lobbying groups gathered on Wednesday to discuss the issue.

“Many question whether the inking of tens of memoranda of understanding in Iran could actually be converted into potential company profits,” said Lee Dong-geun, executive vice chairman of the KCCI.

“The proposed number is a projection of the business potential and an MOU is a step that takes us very close to inking final project deals.”

President Park’s recent trips to Iran and Mexico laid the foundation for $63.9 billion in export sales with a major focus on the business partnerships on infrastructure, energy and medical development, according to data released by KITA.

In Iran, Park’s visit helped initiate 30 projects with total export sales of $37.1 billion. Memoranda of understanding for 27 of the projects have already been signed and the three remaining are in process of being signed soon.

In Iran, 123 local companies were matched with 494 buyers, signing actual business deals worth $537 million. In Mexico, $254 million export contracts have been signed through the same program.

As for the outcome of one-on-one consultation, Seoul’s Bedell One Corporation was designated the preferred partner to supply auto parts to SAIPA, the second largest automaker in Iran, beating competition from China and Japan.

“Competition in international markets is almost a war, but without actual bullets flying around, and so signing an MOU is a tough job to get done,” said Park Yong-maan, the head of KCCI.

“It is meaningful in that the country opened a gateway to business opportunities [in the Middle East] and we ask for the government to continue its economic diplomacy.”

To further exploit the business potential opened up by Park’s trips, she agreed to provide more financial support and human resources to aid businesses in the Middle East.

Other suggestions made during her meeting with business leaders in Iran include the expansion of economic missions to other regions such as Africa.