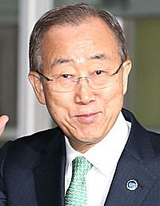 UN Secretary General Ban Ki-moon is scheduled to visit Korea at the end of this month and is expected to take part in international gatherings in Jeju Island and Gyeongju, according to multiple sources on Wednesday. He will also attend a Group of Seven summit in Ise-Shima, Japan.

Ban’s visit is being watched closely as his 10-year tenure as the United Nations chief winds down in December and he may try to reenter Korean politics.

During his visit to Korea, expected to kick off on May 25, he is not scheduled to include a stop in Seoul.

Ban is confirmed to attend the 66th Department of Public Information (DPI)/Non-Governmental Organization (NGO) Conference in Gyeongju, which runs from May 30 to June 1.

The conference, which is being held in Asia for the first time, has the theme “Education for Global Citizenship: Achieving the Sustainable Development Goals Together.”

Ban is expected to make an earlier trip to Jeju Island to attend a three-day Jeju Forum for Peace and Prosperity, which is scheduled between May 25 and 27. He may make a key note speech on May 26.

The organizers of the forum extended an invitation to Ban months ago.

Ban is then expected to head to Japan from May 26 to attend the two-day Group of Seven in Ise-Shima in Mie Prefecture.

Obama will make a historic trip to Hiroshima, the first U.S. president to visit the site where the United States dropped a nuclear bomb during World War II.

Ban “welcomes” Obama’s Hiroshima visit, said UN spokesman Stephane Dujarric. “For the secretary-general, one of the enduring lessons of Hiroshima is the need to abolish nuclear weapons once and for all,” he said, adding that the visit will send a “global message on the need for nuclear disarmament.”

Domestically, there is keen interest in whether Ban plans to run in the 2017 presidential race, especially following the April 13 general election defeat by the ruling Saenuri Party, which lost its majority in the National Assembly.

Ban, a career diplomat, grew up in Chungju in North Chungcheong. Residents of Chungju printed a postcard showing Ban’s old house in his hometown, according to the autonomous citizen committee of the Munhwa-dong in Chungju on Wednesday. The committee printed 1,000 postcards of the house in which he resided while attending elementary, middle and high school in Chungju until 1971.

Ban joined Korea’s Foreign Ministry in 1970 and served as foreign minister from 2004 to 2006 under the Roh Moo-hyun government.

The city of Chungju restored Ban’s old residence on 75.2 square meters of land in 2013, a project that cost 330 million won, showcasing sculptures of Ban as well as items he used during his school days.