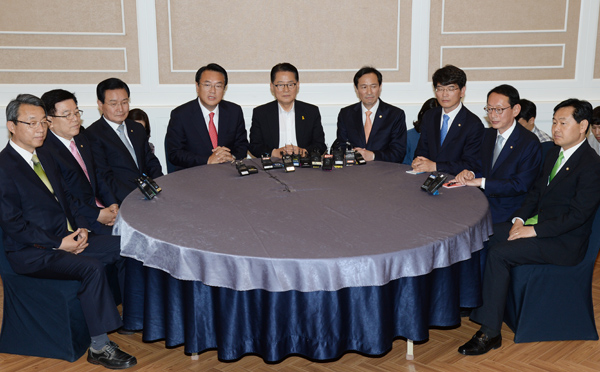 Floor leaders and chief policymakers of the three major parties hold a meeting in a restaurant in the National Assembly on Wednesday to begin their first negotiation to form the 20th National Assembly, which will start its term on May 30. [NEWSIS]

A lawmaker from the center-left Minjoo Party of Korea will likely become the next speaker of the National Assembly, as President Park’s conservative Saenuri Party has decided to go after the chairmanship of the powerful Legislation and Judiciary Committee, one of the assembly’s 16 standing committees.

“The floor leadership has concluded that we must not make artificial efforts to reverse the outcome of the general election to win the speaker post,” Saenuri’s new floor leader, Chung Jin-suk, told the JoongAng Ilbo on Tuesday. Chung added that the party will not make efforts to become the largest party in the National Assembly.

In the April 13 general election, Saenuri, which earlier commanded a majority in the 300-member legislature, only won 122 seats and was reduced to being the second-largest party. The Minjoo Party of Korea, meanwhile, won 123 seats, while the People’s Party took 38 seats and the Justice Party won six. Independent candidates won 11 total seats.

Of those 11, seven are former Saenuri members who, after being denied nominations, left the party and then won races on their own. Although speculations were high that they would soon return and make the Saenuri Party the largest power in the assembly, Chung said on Tuesday that the party will not make any moves to artificially become the largest party to occupy the speaker post.

The largest party in the assembly has the power to nominate the National Assembly speaker and chairmen of key standing committees. Senior Minjoo lawmakers, including Reps. Moon Hee-sang and Chung Sye-kyun, are competing for the post.

With the emergence of a three-party system now for the first time in 20 years, the once-ceremonial position of speaker will become more important than ever. According to the National Assembly Act, legislative schedules are decided by the speaker based on a consultation with negotiation blocs, which are parties comprising more than 20 legislators.

Since this does not require an actual agreement, a Minjoo speaker could decide legislative schedules without a Saenuri consensus. Largely outnumbered by liberal opposition, the Saenuri Party fears that an unfriendly speaker will impede the passage of contentious economic bills during the remainder of Park’s presidential term.

If a Minjoo speaker runs the National Assembly for the first half of its four-year tenure, it will be the first time in 14 years that a lawmaker not in the president’s party will head the legislature. Speaker Park Kwan-yong served the post from July 2002 until May 2004 for the 16th National Assembly and he was a member of the Grand National Party (GNP), the predecessor of the Saenuri Party. At the time, the Uri Party of President Roh Moo-hyun was largely outnumbered by the opposition GNP, and the country’s first-ever presidential impeachment to oust Roh was passed by the National Assembly under Speaker Park’s oversight.

Instead of seeking the position of speaker of the National Assembly, the Saenuri Party is eyeing the chairmanship post of the Legislation and Judiciary Committee. The committee is the final gatekeeper that decides a bill’s submission to the main voting session. The People’s Party leaders, including Chairman Ahn Cheol-soo and floor leader Park Jie-won, said on Tuesday that it is desirable that the speaker and the chairman of the Legislation and Judiciary Committee come from different parties.

The Minjoo Party appeared to agree. The new floor leader of the party, Rep. Woo Sang-ho, earlier insisted that Minjoo must occupy both the speaker and the legislation committee chairman posts, but he recently conceded, saying on Tuesday that the specifics will be negotiated by the three parties.

The floor leaders of the three parties began their first negotiation at 5 p.m. on Wednesday to form the 20th National Assembly, which will start its term on May 30.

“The legislation committee chairman is extremely important,” said Rep. Kim Do-eup, deputy floor leader of the Saenuri Party, “but we will negotiate with the opposition parties with regard to the whole picture.”

The parties are scheduled to elect the speaker and two vice speakers by June 7 under the National Assembly Act. Standing committee chairmen are to be elected by June 9.