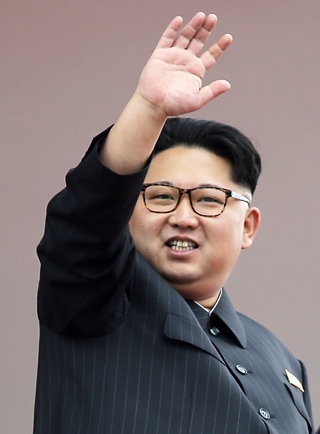 With the completion of North Korea’s congress, which named its leader, Kim Jong-un, chairman of the party, attention is now on changes made during the congress, what they will mean for the reclusive state and what direction state affairs will now take.

As widely expected by analysts in Seoul, the 7th Congress of the Workers’ Party of Korea (WPK) bestowed Kim, presumed to be in his early 30s, with the title of Party Chairman, a title used by his grandfather, the state founder Kim Il Sung, 67 years ago.

While Kim was already the most powerful man in the country before the congress, and bore many titles - including first chairman of the National Defense Commission and supreme commander of the Korean People’s Army - the four-day congress, convened for the first time in 36 years, was used as a venue to consolidate his grip on power.

The reshaping of the highest-decision making body of the WPK signals what could be Kim’s willingness to shift the balance of power from the military to the party in a major departure from his father, Kim Jong-il, who advocated the military-first policy known as songun throughout his 17-year rule until his death in December 2011.

“While the strengthening of the party’s authority already began when the North made it official that Kim Jong-un was heir apparent in 2009, [the outcome of the congress] means that Jong-un has finished all preparations [for a party-centered leadership],” said Koh Yoo-hwan, a professor of North Korean studies at Dongguk University in Seoul.

Koh also noted, however, that the military will continue to have significant influence, with songun elements remaining “a basic pillar,” pointing out that the dual-track policy recently declared by Party Chairman Kim, which calls for nuclear development and economic progress, stems from a songun agenda.

The North’s military-first policy has been cited as one of the factors responsible for its economic downfall since so many resources have been diverted to the military rather than to helping the economy and raising the quality of life of its people.

The once-in-a-generation political event put 29-year-old Kim Yo-jong, Kim Jong-un’s younger sister, center stage by placing her on the 129-member roster for the WPK’s central committee, making her the highest-ranking woman in the country.

Kim’s debut on the political stage was 13 years ahead of when her aunt, Kim Kyong-hui, the younger sister of Kim Jong-il, made her political debut by entering the party’s central committee in 1988 at age 42.

While Yo-jong, who studied abroad together with her brother in Switzerland in her teens, was not named director of the Propaganda and Agitating Department of the WPK, which is responsible for the cult of personality surrounding her brother, it is expected that she will, practically speaking, run the department as its current chief, Kim Ki-nam, is 87 years old.

The congress was also a reminder to the outside world of how difficult it can be for foreign journalists to cover the autocratic regime from within. North Korean officials were attached to every member of foreign media crews in order to monitor their activity and demand deletion of footage they deemed disrespectful and insulting to the Kim leadership.

North Korea expelled a team of three BBC crew members on Monday (who were already at the airport on their way out of the country) without elaborating on what had offended officials, other than to say that their reports were insulting to the country’s leader.

BBC journalist Steve Evans, who was not expelled, said in a video report posted on May 6 on the BBC website, “I was followed to the urinal in one case,” adding, “it has been a very difficult and tense relationship.”

“Control doesn’t begin to describe the situation,” he said.

The conclusion of the seventh congress without a fifth nuclear test, which the North was expected to carry out to mark the event, and Chinese President Xi Jinping’s congratulatory message for the occasion, appears to suggest the easing of tensions between the two communist allies.

Relations between the two had grown chilly after the North ignored China’s repeated warnings against nuclear tests, two of which were carried out in the past three years under Kim Jong-un’s watch.

“The fact that President Xi sent a timely message of congratulation to Kim Jong-un can be seen as his reward for Pyongyang for accepting Beijing’s demand that it not push ahead with the fifth nuclear test,” said Cheong Seong-chang, a senior fellow at the Sejong Institute, a policy think tank.

“As the two made conciliatory gestures, with the party congress acting as momentum, there is an increased possibility that China will soften its sanctions on North Korea and head toward a gradual improvement in relations.”

Backing the assessment that Pyongyang held off on another nuclear test at China’s urging, 38 North, a site run by the U.S.-Korea Institute at Johns Hopkins University’s School of Advanced International Studies, reported Tuesday that “There are no apparent signs that a detonation will occur in the near future,” based on a satellite image of North Korea’s Punggye-ri nuclear site in North Hamgyong Province from Sunday.

The website also noted that vehicles, which had been observed as late as Thursday at what was considered to be the command center, were “no longer present” in the imagery taken three days later.