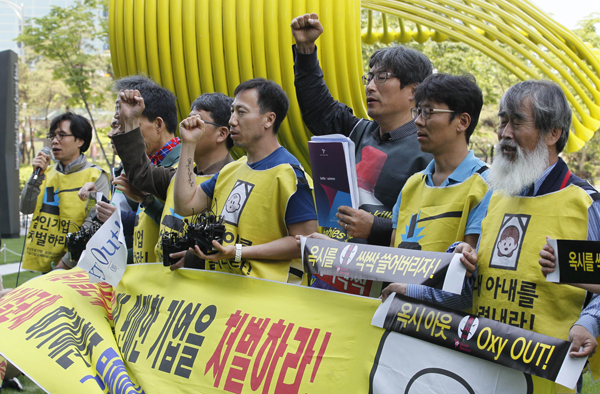 For the first time in the ongoing Oxy case, prosecutors on Wednesday filed a pre-trial detention warrant for three former high-level workers at Reckitt Benckiser Korea, the manufacturer of a humidifier sterilizer line that is suspected to have killed scores of consumers five years ago.

Seoul prosecutors said the warrant was in large part due to the heavy nature of the crime and the high probability that they may destroy any evidence. A local court will evaluate the cause for the warrant on Friday.

Former CEO Shin Hyun-woo, 68, as well as the former head of the company’s product research center and a former senior researcher all face charges of involuntary manslaughter and professional negligence.

They are also suspected to have falsely advertised the troubled products by claiming to the public they were innocuous.

The CEO of the local company Butterfly Effect, which made imitations of Reckitt Benckiser Korea’s humidifier sterilizers and sold the products from 2009 to 2011, was also slapped with the same charges.

Wednesday’s announcement was the latest development in a snowballing investigation surrounding Reckitt Benckiser Korea, as the British-based company’s reputation now suffers from failed attempts to cover up a case that went forgotten for so long.

Since Seoul prosecutors launched a probe into the case early this year, it has evolved on many fronts, from the Saenuri Party deciding on Sunday to hold a National Assembly hearing on the scandal to victims picketing outside the British headquarters last week, demanding a formal apology.

Prosecutors have so far discovered that 4.5 million Oxy sterilizer humidifiers were sold from 2001 to 2011, when local health authorities banned all sales of the products, citing health problems.

While the government has officially documented 221 people to have been harmfully affected by humidifier sterilizers produced by Oxy and other companies, 177 were linked to Oxy; of the 90 people who eventually died, 70 used Oxy. Among those who used products from Butterfly Effect, 27 suffered from negative aftereffects, 14 of whom died.

Prosecutors said Butterfly Effect’s products had contained a substance that was four times more toxic than polyhexamethylene guanidine (PHMG), a chemical in Oxy that was deemed to be the key reason so many people fell victim.