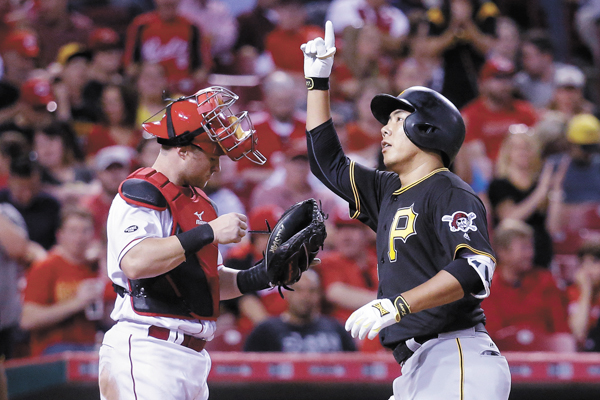 Pittsburgh Pirates Korean slugger Kang Jung-ho bagged a home run on Thursday as well as the game winning run to lift the Pirates 5-4 over the Cincinnati Reds.

During a Major League Baseball game at the Great American Ball Park in Cincinnati, Ohio, Kang batted sixth and played third base and went 2-for-3 with one home run, one run batted in (RBI) and two runs-scored. His season batting average saw a slight increase from .250 to .333, or 5-for-15 this season.

Kang’s first at-bat of the game was in the top of the second inning when he went up against Reds’ Alfredo Simon. At two and one count, Kang clicked the 89-mile-per-hour cutter to the left but got lined out by left fielder Adam Duvall. Kang was hit by a pitch in the fourth inning with two outs and got to first base but failed to drive a run with the next batter, Sean Rodriguez, striking out.

The 29-year-old slugger’s solo dinger came in the top of the seventh inning when the Pittsburgh club was behind 2-4. After two strikes against Simon, Kang blasted a 76-mile-per-hour curveball over left field to add a run for the Pirates.

The Pirates tied the game during the next inning when Josh Harrison drove a home run to right center field against Reds southpaw Tony Cingrani by smashing Cingrani’s 94-mile-per-hour four seam fastball. With the game tied at 4-4, Kang went to the plate as the first batter of the ninth inning and singled on a ground ball and advanced to second base on a throwing error by the Reds shortstop Zack Cozart. After the sacrifice bunt by Rodriguez, Kang ran to third base and finally drove home during the next play with Jordy Mercer’s single to right field. Kang’s go-ahead run was the last of the game, lifting the Pirates to a 5-4 win over the Reds.

Kang’s solo homer on Thursday is his third this season after his multi-homer on May 7, the first game he played after the eight months absence due to a knee injury last September. His power stroke from last season, which earned him 15 home runs in 126 games before his injury, seems to be intact as he has already belted three home runs in five games.