‘Soul of Seoul’ is on target for another winning season

‘Soul of Seoul’ is on target for another winning season 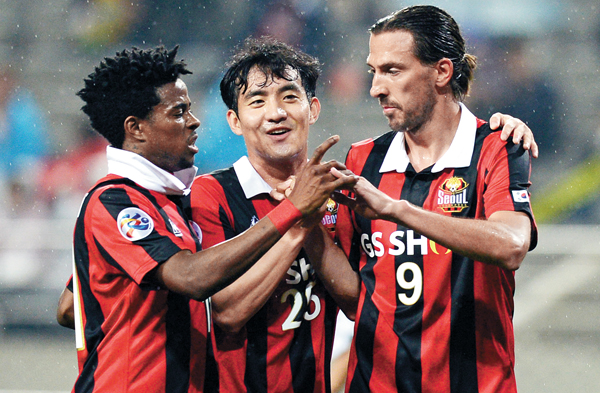 Who can stop FC Seoul’s goal-scoring tsunami? The Seoul powerhouse is top in both the K-League and Asian Champions League (ACL), piling in 35 goals in the 12 games it has played so far this year.

Since its establishment in 1983, FC Seoul has grown to become one of the elite football teams of the K-League.

As the “Soul of Seoul,” the team has brought the host city glory by earning accolades including five K-League titles, two League Cups - a Korean professional football competition outside the K-League which is sponsored by various companies and groups - and one FC Cup.

Seoul has consistently appeared in the top of the standings in various competitions. Last season, FC Seoul was the runner-up in the Korean FA Cup as well as ACL semi-finalist. Although the team finished fourth in the K-League last year, it has claimed two K-League trophies in the past five years in 2010 and 2012. 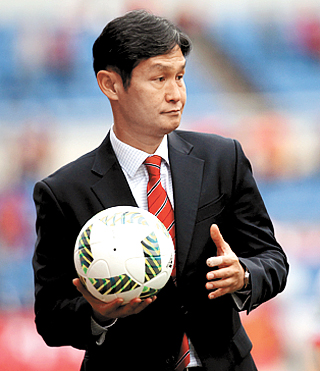 And this year Seoul could end up frontrunners again as the team is deemed title-winning contenders in events inside and outside of Korea. Although there is a lot going on behind the scenes, what makes Seoul outstanding can be boiled down to two aspects: its offense and leadership.

Seoul’s offense is probably the main reason behind the club’s success this season in the K-League and the ACL.

Stacked with big names such as Carlos Adriano, Dejan Damjanovic and Park Chu-young, the firepower of FC Seoul has drawn a lot of attention domestically and internationally.

“Seoul’s offensive line-up is confident,” said Hwang Sun-hong. He is former Pohang Steelers manager and was starting striker for the national team back in 2002 when the Taeguk Warriors advanced to the semi-finals of the World Cup.

“You can see it in their movement,” he said. “Their confidence can be spotted from miles away. This means Seoul as a team has reached its apex.”

When asked about Seoul’s chance to win the ACL this year, he added, “This year is perhaps the most opportune period for Seoul to take the top in Asia. Even as an outsider, I believe that they will make it happen. Not only is their offense solid, but they are also strong in midfield. Frankly, a team without solid midfielders cannot succeed no matter how brilliant its offense is.”

Indeed, Seoul’s goal-scoring ability helped the team to top the K-League standings, even though the points it earned so far in the league are the same as the second ranked team Jeonbuk Hyundai Motors. While Seoul has netted 18 goals so far, Jeonbuk has had 16.

Among the three ace forwards, Adriano has been the busiest, making an impact in the K-League and the ACL to lead them both in goal scoring, with six in the K-League and 10 in the ACL. The 28-year-old often came to the rescue for Seoul in the K-League, when the team was in desperate need of a goal. His latest Korean professional league goal came during the eighth round match on April 30 against Suwon Samsung Bluewings FC when he scored an equalizer in the second half to allow the team to escape defeat.

His footprint is quite conspicuous in the ACL as well. Dubbed “lethal” by the Asian Football Confederation (AFC), the Brazilian has had hat-tricks and more in the group stage matches of the ACL. In the first match of the group stage on Feb. 23, where Seoul crushed Buriram United of Thailand 6-0, Adriano scored four goals. The AFC said Adriano’s efforts came from “nerves of steel” of the Brazilian forward.

And Damjanovic’s contribution has been just as impressive. The Montenegrin played for Seoul from 2008 to 2013, scoring 122 goals over the period, and rejoined the Reds prior to this season to bolster the team’s offense. “Damjanovic is very energetic on the pitch, finding the empty space to create offensive chances,” said Choi Yong-soo, the manager of FC Seoul.

The Montenegrin forward does not shy away from attacking the goal with every opportunity. He has scored four goals for Seoul in the K-League so far. As well as his scoring ability, what makes Damjanovic invaluable for the club is the obvious synergy he has with Adriano.

“I came to assume more of an assisting role playing together with Adriano,” said Damjanovic when asked his style of play. Most will agree as some of the goals that Adriano has scored started at the feet of Damjanovic, including the two assists during the match against Buriram which the AFC entitled “visionary” and “neat.”

In the midst of the two foreigners, there is Korean striker Park. Although he is yet to fully recover from the foot injury that cost him the season last year, Park never misses his chances, scoring four goals out of seven games he’s played so far in the K-League. Once Park returns to the pitch, Seoul’s offense will undoubtedly become more menacing.

The leadership by manager Choi has played a pivotal role in Seoul’s success as well. According to the K-League, Choi has been selected as the K-League Classic manager of the month for March and April. Leading the team with six wins, one draw and one loss for the two months, the winning rate of the team under Choi’s watch stood at an astonishing 81.3% over the period.

Choi started his career as a striker for the Lucky-Goldstar FC, the predecessor of Seoul, and played in 148 K-League games to tally 54 goals and 26 assists. As the former member of the K-League’s best-11 and the Korean national team, Choi is one of the most decorated footballers domestically as well as internationally, appearing in 69 international matches throughout his career to drive in 27 goals.

Although he was approached by Jiangsu Suning FC of Chinese Super League last July and offered lucrative compensation, Choi turned down the offer and stuck with his old team.

Seoul’s next K-League game is on May 14 against Seongnam FC at Tancheon Sports Complex in Seongnam. The team is also slated to play Urawa Red Diamonds of Japan on May 18 at Saitama Stadium 2002 in Saitama, Japan, in the Round of 16 of the ACL.