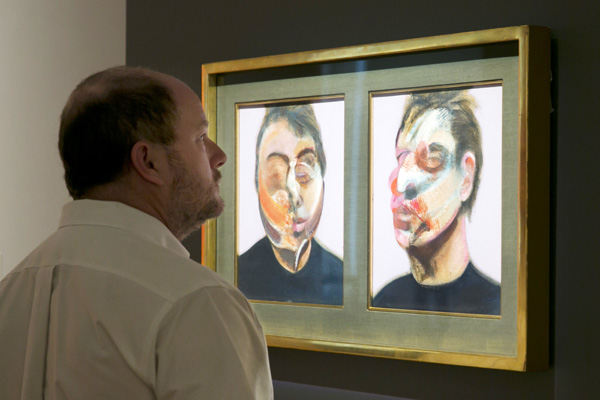 Francis Bacon’s “Two Studies for a Self-Portrait” is viewed during the spring auction preview at Sotheby’s in New York. Bacon’s double-panel self-portrait and a Cy Twombly’s “Blackboard” painting executed in blue, both in private collections for decades, are the top highlights at Sotheby’s auction of contemporary art on Wednesday. [AP/NEWSIS]

NEW YORK - A Francis Bacon double-panel self-portrait and a Cy Twombly “Blackboard” painting executed in blue - both in private collections for decades - were the highlights of Sotheby’s auction of contemporary art on Wednesday.

Twombly’s “Untitled (New York City)” sold for just under $36.7 million. The 1968 work is the only composition from his celebrated “Blackboard” series that features blue loops on a gray background. It was acquired directly from the artist and has remained in the same collection ever since.

Sotheby’s also offered another large-scale canvas by Twombly, this one created in 2004 in the last decade of his life. “Untitled (Bacchus 1st Version V),” which fetched $15.4 million, is executed in blood red swirls and is one of six paintings from his famous “Bacchus” series. The auction record for Twombly is $70.5 million, achieved at Sotheby’s last November.

The paintings were among 44 artworks going under the gavel during the evening sale.

Bacon’s 1970 diptych, “Two Studies for a Self-Portrait,” brought in $35 million. It had remained in the same collection for 46 years, having been acquired the same year it was created.

The work has been exhibited only twice, once at the Grand Palais in Paris in 1971 and at the Marlborough Fine Art Small Portrait Studies exhibition in London in 1993. It was estimated to sell between $22 and $30 million.

Bacon created only two self-portraits using the double format; one sold last year at Sotheby’s for $22.4 million. The record for a Bacon work is $142.4 million.