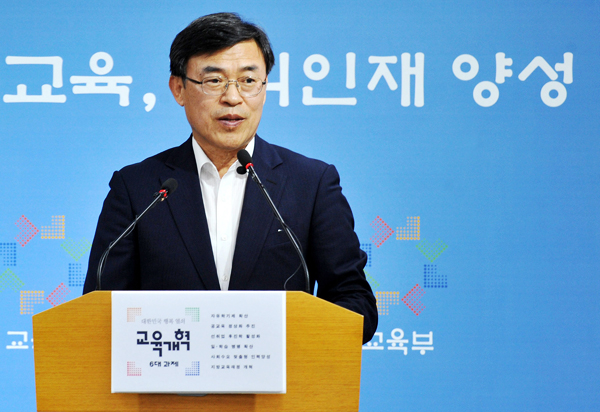 A senior official at the Ministry of Education announces eligibility standards for national university scholarship programs.

Just like other past administrations, the review of Lee Myung-bak’s administration is not good. The four-rivers restoration project had dubious effects despite astronomical investment, and the natural resources diplomacy is tainted with corruption and inefficiency. However, one thing was done well. In May, 2009, the Korea Student Aid Foundation was established, offering loans for college tuition and living expenses.

The foundation has made loans totaling 16 trillion won ($13.7 billion). That’s about 2 trillion won every year since the second semester of 2009. It is separate from the national grants that began in 2012 after President Park Geun-hye’s election promise. Every year, 400,000 students who have difficulty paying tuition or living expenses use the service, and the low interest rate made the program popular. The Bank of Korea’s interest rate is 1.5 percent; for student loans, it is 2.7 percent, 1.2 percentage points higher. Students can pay back in installments after getting a job.

Things were very different before the foundation. All student loans were provided through banks with government guarantees. In 2008, the average loan interest rate was 7.8 percent, when the standard rate stood at 3 to 5.25 percent. Banks took fees and profit. While banks enjoyed risk-free profit, students struggled to pay back loans.

The Korea Student Aid Foundation is a product to solve the real challenges. The foundation’s public relations manager, Ahn Dae-chan, said that “2 trillion won-worth of old bank-issued student loans were refinanced with low-interest government loans, and 85 billion won in repayment burden has been reduced annually.” By removing the intermediary role of banks, more loans could be offered, and the process became more convenient.

In 2010, the United States made similar reforms. In the past, both direct government loans and indirect bank loans had been offered, and indirect loans were eliminated. Student loans became a social issue beyond economic concern. In the United States, student loans are the second-largest type, after home mortgages. It totals $1.3 trillion, more than automobile financing and credit cards. After the 2008 global financial crisis, the student loan default rate went up, and it was considered the next time bomb.

One of the major causes was the banks, just like in Korea. Banks counted on the government guarantee and liberally spent money on marketing to students and schools. The cost was transferred to student borrowers in fees and lending rates. The burden on the government also grew. For every 100 dollars loaned, the government had to pay $31, far higher than $20 expense in direct government loans.
Usually, the market is more efficient than the government. The invisible hand adjusts supply and demand with price. However, student loans in Korea and the United States show that it is not always true in welfare. The transfer fee occurs when middlemen like banks get involved. When you ask your kid to do grocery shopping, you need to offer ice cream or a snack.

The biggest welfare issues today are child care and youth employment. The government is not directly assisting the demand directly. Day-care centers, not parents, receive subsidies. Companies, not young people who are hired, get government subsidies. While the justifications are good, it could distort the market and lower the actual benefit of welfare offerings. The focus is on the welfare provider, not the users.

Last year, the government invested 1.98 trillion won on a youth employment program, creating 48,000 jobs for young people. It cost 41.25 million won to create each job, more than the starting salary of new hires at large corporations. The young people who are actually hired get far less, often less than 2 million won a month. The difference between the government budget and actual wage is the delivery cost.

The same goes for child care policy. A lot of money is spent on child care subsidies, but parents are not very satisfied. It is not the parents but the child care providers that raise their voice on the budget issues in toddler and preschool programs. Something is seriously wrong.

Welfare policies need to focus on the users, and the provider should not be prioritized. It would result in higher cost and lower efficiency. It is like looking at the finger when the monk is pointing at the moon. We need to revamp the indirect delivery methods in our welfare system and reinforce direct assistance. The Korea Student Aid Foundation can be a good example.