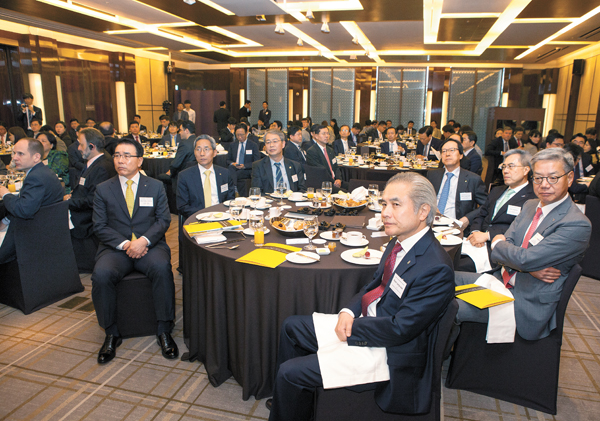 Financial Services Commission Chairman Yim Jong-yong, third from left at the head table in the center, and attendees including heads of Korean financial companies and institutions listen to the opening speech delivered by JoongAng Ilbo publisher Kim Gyo-joon at the Korea Economic Forum hosted by the Korea JoongAng Daily at the Westin Chosun Hotel in central Seoul on Thursday. [PARK SANG-MOON]

Business leaders and foreign diplomats have welcomed Korea’s “open communication” and its moves to lessen regulations for overseas companies.

Yim Jong-yong, chairman of the Financial Services Commission (FSC), told an audience of about 120 dignitaries, including 14 ambassadors and 40 other diplomats, on Thursday that “the FSC will have meetings with foreign companies regularly to hear about their hardships and discuss ways to overcome them.”

Yim was addressing the 2016 Korea Economic Forum, hosted by the Korea JoongAng Daily, at the Westin Chosun Hotel in central Seoul.

The 10th annual economic forum gave foreign diplomats, as well as officials from local and foreign banks, security funds and chambers of commerce, insight into the Korean government’s initiatives to reform the financial industry. 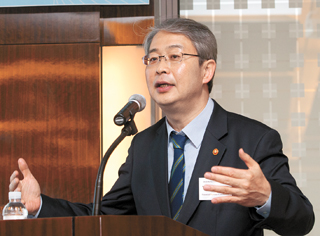 “What most impressed me today was Korea’s ability to open up about difficulties it has and to discuss them freely,” Natallia Zhylevich, the ambassador of Belarus to Korea, said. “I was glad to follow up with what actually is going on in Korea, and once again, I really liked the fact that they discussed difficulties openly to find a way out.”

The FSC chairman explained the current challenges of the Korean financial market, including the need to restructure debt-ridden companies and the deregulation of foreign financial firms and other businesses.

“I think Korea now has two challenges, such as [struggling] shipbuilding and shipping industries and searching for new export markets,” Alexander Masaltsev, a second secretary at the Russian embassy, said. “If Korea can find answers to these, it will be able to find the gate to the future and happiness, and I believe this type of forum can help the country to do so.”

Eric Walsh, the Canadian ambassador to Korea, said it was good to see so many decision makers in one place to discuss financial issues.

According to a survey conducted by the Korea JoongAng Daily from April 11 to May 9, foreign financial institutions, businesses and the diplomatic community want more aggressive deregulatory moves and reforms.

About 74 percent of the 103 respondents to the survey said the most urgent task for the financial regulator is to lower barriers against foreign players entering the Korean market. About 68 percent pointed to excessive government regulations and intervention as the biggest problem of the Korean market.

On a scale of one to five, with five being the most positive, respondents graded deregulation of the financial industry at 2.16, while they scored Korea’s information technology financial infrastructure at 3.5.

About 58 percent said the most significant issue of the Korean financial industry is financial reform, and they are well aware of what the FSC is trying to do.

In response to the results, the FSC chairman acknowledged on Thursday that “as the survey showed deregulation is crucial, we are making efforts to do more as part of reforms.”

“The future goals spelled out by the commissioner are challenging, but I believe they will be accomplished,” John Schuldt, president of the American Chamber of Commerce (Amcham) in Korea, said. “As the commissioner said, the FSC, the Financial Supervisory Service and financial institutions working together can achieve those reforms.

“I firmly believe that the commissioner is willing and dedicated to working together and communicating well with business organizations like Amcham Korea, and this should enhance the ability for reform to occur.”

“Deregulation and the liberalization of the financial market are important when you want to create more economic growth,” he said.

“Both financial institutes and consumers will benefit from it. I was very pleased to hear the chairman speak so openly and enthusiastically about the reform agenda that is being worked on as we speak.”

Reding said it was quite difficult for them to meet representatives at the FSC in the past, and he was glad to hear the chairman emphasizing the importance of more open communication.