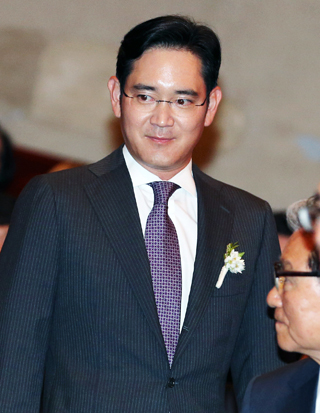 Samsung has been under Lee Jae-yong’s leadership for two years now. After the first year, a chairman of a top 10 company said, “I have nothing to tell Lee Jae-yong, as I have no knowledge or experience on the big business that I’ve never handled before.” Another year has passed, and I don’t have a scale to measure the merits and faults of the past two years, either. But the time has come to replace the outdated scale.

The public has double standards for Samsung. It is a love-hate relationship, lashing or envy. But if you want to offer an opinion and advice, it is rather different. Those with influence often say, “Samsung is not just Samsung.” There is no need to argue that the company needs to think about the nation as a whole. But the argument often goes on, “Samsung should not just sell subsidiaries or reduce its workforce. It will hurt the overall economy. Samsung needs to think about its influence.”

I think this scale is outdated. Whether Samsung likes it or not, whether Lee is doing well or not, Samsung is the backbone of the Korean industry. But it is not, and can’t be, its guardian. Samsung Electronics’ domestic sales are only at 10 percent. It has become a global company. If it pretends to be the protector of the Korean economy, it won’t be able to protect Samsung itself. In fact, Samsung should be more optimized for changes. It should become more creative and lighter. And it needs to become more aggressive. That will help the Korean economy. It can fulfill social accountability through public activities and law observance.

Another scale to be abandoned is the nostalgia for a legend. Founders of all successful companies become a legend. Sayings and doings of the businessmen who attained glorious growth become a legend. But it should remain a legend. In digital economy, where convergence and integration become more and more complex, there is no room for a legendary leader. If there are lingering feelings for the big boss internally, it should be abandoned immediately. A big boss is prone to make big errors. A leader should only command the creativity of each section. One of the greatest accomplishments of Chairman Lee Kun-hee was to divide accountability for management of each department. The ongoing efforts to add a start-up spirit is also noteworthy. But in the scale measuring Samsung, there is a weight for the legendary manager. This scale is outdated. It is a contradiction to criticize self-righteous owners while expecting an omnipotent leader. It is like voting for the current president in reminiscence of Park Chung Hee’s time. If you weigh Samsung on this scale, Samsung cannot make new challenges as no failure can be tolerated.

Samsung is the one to untangle the knot. If Lee Jae-yong actually manages the company and takes real responsibilities, there is no reason to be reluctant to get legal requirements in order. Listing Lee as a registered director is the first step of replacing the outdated scale.


*The author is the head of the digital team at the JoongAng Ilbo.