Nao-mi tells you how smart IBM’s Watson is

Nao-mi tells you how smart IBM’s Watson is 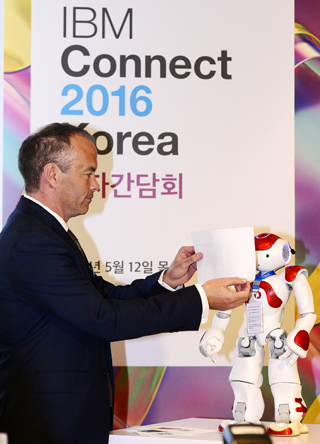 Jason Leonard, director of Asia-Pacific IBM Watson, has a conversation with Nao-mi, a humanoid robot with IBM Watson’s cognitive intelligence system, on Thursday at a press briefing held at the Grand InterContinental Seoul Parnas. [NEWSIS]

The world acknowledged how far artificial intelligence has progressed when Google DeepMind’s AlphaGo beat a human Go professional this year.

And to show just how far IBM is developing in the AI world, the company brought its own Watson super computer and a humanoid to help explain the company’s future strategies for Korea.

IBM Korea said it aims to implement Watson’s technology over a range of business areas from medical, finance to education and public sectors and showed off its latest developments at a forum “IBM Connect 2016” at the Grand InterContinental Seoul Parnas.

Nao-mi, Japanese IT company SoftBank’s humanoid with the brains of IBM’s Watson, showed off its Gangnam-style dance and witty talk for the first time in Korea. During a 10-minute conversation session with a presenter at a press briefing, the robot came back with fast responses and a smart choice of words.

“In fact many types of different application and devices can also interact with Watson, although perhaps they’re not as cute as me!” Nao-mi said during the demo-conversation.

IBM also gave several examples where the company’s cognitive computing system is applied to actual business scenes. Hilton Hotel and IBM Watson teamed up to pilot a smart robot, dubbed Connie, that will act as a concierge answering guests’ questions and learning as it works.

In the child education sector, IBM is collaborating with Sesame Street to create next-generation tailored learning tools. A start-up Elemental Path has also teamed up with Watson to create dinosaur toys with cognitive intelligence, the CogniToys.

“Computing is entering a new cognitive era and they [not only] understand data but reason about it and never stop learning,” said Ashish Kumar, vice president of cloud sales in IBM’s Asia-Pacific division. “Watson is the most advanced example and there are more than 350 Watson ecosystem partner companies.”

Watson’s cognitive system is built on the IBM’s cloud platform, which is open and keeps expanding as it learns. To ramp up its cognitive computing solution business in Korea it partnered with SK C&C Holding last year and will launch IBM Cloud Center in Pangyo this summer.

However, some worry that smart computers will eventually take jobs from humans.

“We think it’s unlikely and it’s not our objective,” said Jason Leonard, director of Asia-Pacific IBM Watson. “Cognitive systems don’t do your thinking for you … it’s going to be a very long time for Watson to replace judgement.”