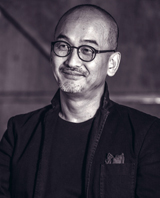 JEONJU, North Jeolla - Lee Joon-ik is a prolific director, having made more than 10 films since he debuted in 1993 with the family comedy “Kid Cop.”

But oddly, this was the 58-year-old filmmaker’s first time being officially invited to the Jeonju International Film Festival (JIFF), probably because he has only made commercial films, best represented by “King and the Clown” (2005) and “Once Upon a Time in a Battlefield” (2003). The Jeonju film event, on the other hand, is oriented toward independent and art-house cinema.

But this time, Lee’s latest low-budget historical flick, “Dongju: The Portrait of a Poet,” an autobiographical movie about the poet Yun Dong-ju (1917-45), was invited to the festival’s Outdoor Screening section, which sold out its 2,000 seats.

Lee, who has been busy traveling to Japan, England, the United States and more to promote “Dongju,” made time to visit JIFF during its first weekend.

The Korea JoongAng Daily sat down with him at a hotel cafe in Jeonju to learn more about his recent change in direction. Here are some highlights from the interview.

Q. This is your first time visiting Jeonju International Film Festival. How do you feel about it?

A. It feels as if now they are finally accepting me as a real filmmaker (laughs). But for shooting movies, I have been to Jeonju several times and have received much support from Jeonju Film Commission. I think Jeonju is growing into another movie hub, doing so well in supporting filmmakers and holding the festival.

You have been engaged in commercial films throughout your career. But recently, you have been moving toward small films, such as participating in the Wildflower Film Awards, which focuses on low-budget cinema. “Dongju” is also a film that deviates from the typical grammar of a commercial film. How has this come about?

I think it is far-fetched to say that I intended to support independent cinema… Am I even qualified to do those things? But I do believe that low-budget and commercial cinema should coexist, and I am just supporting that coexistence. For “Dongju” I worked with staff exclusively associated with Shin Yeon-shick, the producer and screenwriter. It is true that we tried to exclude elements that hinted at a commercial movie.

How did you feel about making that type of a movie?

Oh, it was an extremely enjoyable process. I cannot get enough of it. While not intruding on the relationships I have built up with numerous partners in the industry, I want to do more works similar to “Dongju.” In that regard, I have a role model and it is director Ang Lee. After making “Crouching Tiger, Hidden Dragon” [2000], the director has gone back and forth between blockbuster films like “Hulk” [2003] to low-budget ones. This type of filmography is rare in Korean cinema industry.

But it seems odd that you emphasize that you are a commercial filmmaker when you introduce yourself. Why do you do that?

I think it is a respect toward those who make independent and art-house cinema. It was a way to kind of confess my frivolity as a commercial filmmaker. I know it is not easy to defy the industry structure and create art purely out of want. I am continuously introducing myself with that label because I admire their way of making films.

So what do you think about the current state of Korean independent cinema?

I think it is showing an explosive energy that could only be spotted in the United States during the ’80s. Our independent cinema, in terms of both film quality and actors, doesn’t fall short compared to that of other countries in any way. But what is missing is the market structure that can bring these talents to a wider audience. It is not a matter of if it is commercial or not, it is a matter of the film being exposed to more people.

For example, Tim Burton is a very well-known director but we don’t call his films commercial. We need system to expand the small realm of indie films to bigger audiences, but the know-how is still undeveloped. For example, art-house theaters that are screening not-so-art-house films and re-releasing commercial films are nothing but a justification of their own cause. They need to step up.


Any advice to aspiring filmmakers?

You have to have the guts and positive energy to turn the worst situation into your opportunity. For “Once Upon a Time in a Battlefield,” I was initially its producer but no director would accept the project, so I directed it myself, which became my stepping stone to directing more films. Actor Lee Joon-ki, the main contributor to making “King And The Clown” a success, was the last candidate I picked from auditions after being rejected by all actors I offered the role to.


What is your next project?

I am currently thinking over three projects, in which one is a sci-fi set in 2050. The other two films are both historical ones set in the colonial era. Which one will be made and when, I don’t even know yet.