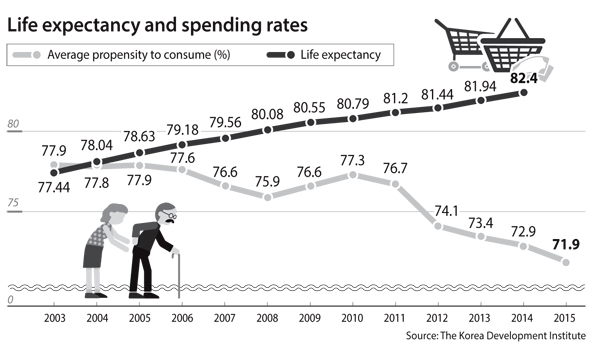 Koreans are having a significant impact on the economy by living longer and saving more, but to maintain this momentum, some thought will have to be given to including senior adults in the labor force and making tangible service industry progress.

The impact of increased life expectancy since 2000 means that Korea’s savings and GDP growth rates increased 3.5 percentage points and 0.4 percentage points each last year, according to the state-run think tank the Korea Development Institute (KDI).

The institute added that the rise in the savings rate could have ramifications for consumption in the short run, but in the long run, it could help boost GDP growth by including capital accumulation and expanding the labor supply.

“In the long run, the preretirement labor supply will expand, boosting the accumulation of capital due to increased savings and, ultimately, enhancing GDP growth,” KDI fellow Kwon Kyoo-ho said.

In Korea, the average propensity to consume, or consumption relative to income, fell from 77.9 percent in 2003 to 71.9 percent last year, according to Statistics Korea.

Life expectancy, on the other hand, rose from 75.5 years in 2000 to 82.4 as of 2014. This means that the period of time after retirement rose some 40 percent during the same period, based on the assumption that the retirement age is 60.

Life expectancy has, since 2000, increased by 0.5 years annually. According to the KDI, the rise in the savings rate is caused by increased life expectancy, since more seniors want to save up money to spend later in their lives.

“Korea’s GDP growth rate is estimated to have risen by about 0.4 percentage points last year,” Kwon said. “Savings heightens capital accumulation and the marginal productivity of labor increases. As a result, the labor supply expands, which eventually improves GDP.”

However, Kwon warned that GDP growth would be limited in the future if the labor market fails to support senior adults in return.

“The senior population’s labor force participation rate failed to improve in proportion to increased life expectancy, despite better health, just inching up from 38.2 percent in 2000 to 39.7 percent in 2014,” he said. Kwon also emphasized that consumption-boosting measures should pay more attention to structural factors.

“To turn increased savings into increased domestic investment,” Kwon added, “consideration must be given to achieving service industry improvements, decisive regulatory rationalization and a flexible labor market to enhance return on investments.”

Meanwhile, another report released earlier this week showed that people over 60 do work more than they did in the past.

There were 206,000 more people aged 60 and over who were working as of April compared to the previous year, according to Statistics Korea on Wednesday.