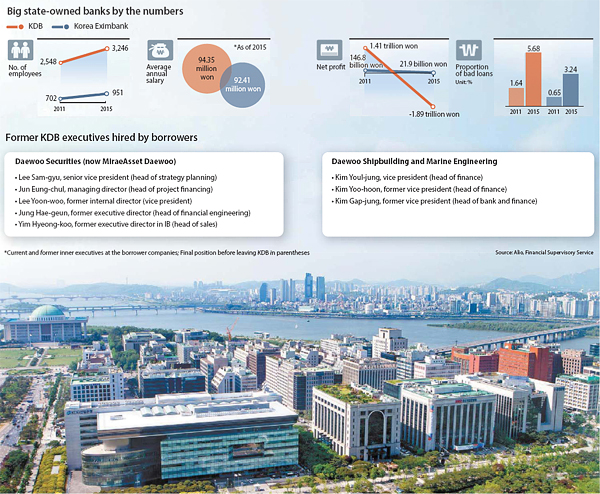 Lax management at state-run banks - in particular at Korea Development Bank (KDB) and the Export-Import Bank of Korea (Korea Eximbank) - has emerged as a hot potato, as their main debtors - shipbuilders and shippers - require restructuring and bailouts.

The management metrics for the two banks are bad, and their history of so-called parachute appointments - sending former executives to cushy jobs at borrowers - is deep and blatant.

At KDB and Korea Eximbank, there are 10 vice presidents under one president CEO, nearly double that of private sector KB Kookmin Bank’s six - even though Korea Eximbank has only 951 employees, less than 5 percent of KB’s 20,000 workers.

“[Salary levels are set high] because a small numbers of employees are in charge of a workload that is heavier compared to other banks,” said an official at the bank.

The government is partially responsible for KDB’s giant size: it has more than 3,000 employees. The Lee Myung-bak administration separated the policy financing division, which was in charge of start-ups and small and midsize company financing, to establish it as a separate public company, the Korea Finance Corporation, in 2009.

This was part of the Lee government’s efforts to strengthen its function as a commercial bank and privatize it. The bank even hired tellers to deal with retail customers.

The Park Geun-hye government scrapped the privatization plan and brought KDB and the Korea Finance Corporation back together last year. As a result, the reintegrated KDB has a total of 3,246 employees, up 27 percent compared to 2011.

The expanded workforce at KDB has resulted in overlaps in businesses and has accelerated competition between it and Korea Eximbank.

The shipbuilders’ business went down the drain, and now, those loans are bad debt on the state-owned banks’ books.

Nothing has changed in the two banks’ employment or executive appointment practices. Since 2011, 43 KDB retirees were re-employed at insolvent borrowers that became KDB affiliates after the bank converted the bad loans into equity, according to data collected by Saenuri Party lawmaker Oh Shin-hwan.

KDB is known for pressuring insolvent borrowers to hire the banks’ high-level retirees as executives.

When the JoongAng Ilbo analyzed Kospi-listed companies in which KDB owns at least five percent of shares over the past five years, it found the bank converted debt into equity for some 20 borrowers during the period. Of those 20 companies, nine gave jobs as internal directors and auditors to 19 former KDB employees.

The longer the lending history, the more former KDB employees got employed at the companies. Daewoo Securities, which is now called MiraeAssetDaewoo after finding a new owner, was the most munificent to KDB retirees. Six former KDB executives got jobs there or are currently working there, followed by Ssangyong Cement’s four and Daewoo Shipbuilding & Marine Engineering’s three.

KDB argues that such an appointment practice helps troubled firms normalize management, saying “the bank participating in the firms’ management is part of the restructuring procedure.”

Critics point out the government’s role in perpetuating these problems.

Whenever the two big state-owned banks suffer losses, the government fills in the gap with taxpayer money.

The government spent a total of 8.01 trillion won since 2008 on the banks. Of that total, 3.44 trillion won went to KDB and 4.57 trillion won to Korea Eximbank.

KDB acquired Daewoo Group and Hynix after the 1997 Asian financial crisis during the Kim Dae-jung administration. The bank then acquired LG Card during the Roh Moo-hyun administration, and STX Offshore & Shipbuilding during the Park Geun-hye government.

“The banks’ lax management and moral hazard should be penalized,” said Jeon Sung-in, a professor of economics at Hongik University, “and the government should seriously consider integration or closure of the institutions to deal with their overlapping functions.”

Analysts say the government should end the vicious cycle of lax management by ending parachute appointments.