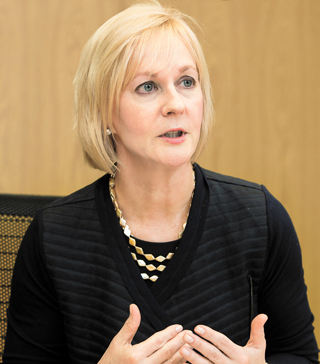 Janice Semper emphasizes the importance of evaluating systems in order to find and develop a worker’s potential. [GE KOREA]

A large number of businesses are starting to adopt performance-based promotion systems instead of paying employees based on how long they have worked at their companies.

“Salary based on years worked is having a negative impact on the system and on youth unemployment,” said Kim Young-bae, vice chairman of the Korea Employer’s Federation.

GE is known for its so-called 10 percent rule, by which the bottom 10 percent of its workforce is fired every year. This rule was adopted by Jack Welch, the youngest CEO of the company, in 1981, and he successfully improved the value of the company by more than 40 times until 2001, when he retired.

Many large corporations have since tried to emulate GE’s model.

Semper, however, said that the 10 percent rule no longer works in the digital era. In fact, many companies in the United States and Europe have taken up the mantra, “Tear up the Jack Welch playbook.”

GE now uses what it calls “GE Performance Development” instead of the 10 percent rule, by which it evaluates employees regularly, instead of once a year.

However, its purpose is not to fire people but to give feedback to employees.

Semper said top-to-bottom culture has disappeared from the company and that its employees can now work more cooperatively and develop creative ideas together.

GE has also changed the role of its managers. Before, managers gave orders and evaluated junior staff members. But now, their role is to find their staffs’ potential and inspire them.

“GE Beliefs and Fast Works” are the systems that GE now employs. GE Beliefs is a guideline to help workers make decisions, while Fast Works is something similar to how start-ups in Silicon Valley work, where ideas from small groups actually turn into business models.

New changes, though, always entail growing pains, and a lot of noise was made when Welch adopted the 10 percent rule. However, GE’s new innovation is working very smoothly.

Semper said her team does not force employees to get used to the new system, but freely discusses it with them in order to come to an agreement. She pointed out that this is why so few workers are complaining about it.

According to Semper, workers at GE don’t see the company as a home appliance manufacturer but as a software-based digital one. She added that most companies around the world, including those in Korea, now have to take similarly innovative actions.

And indeed, many local companies are adopting rewards-based promotion systems, though they tend to be more similar to GE’s older model.

Semper graduated from Muhlenberg College in Pennsylvania, majoring in psychology, and received a master’s degree in industrial and organizational psychology from Columbia University in New York.

She worked at Pepsi before moving to GE in 1998, and has been working at the human resources department there for some 19 years.