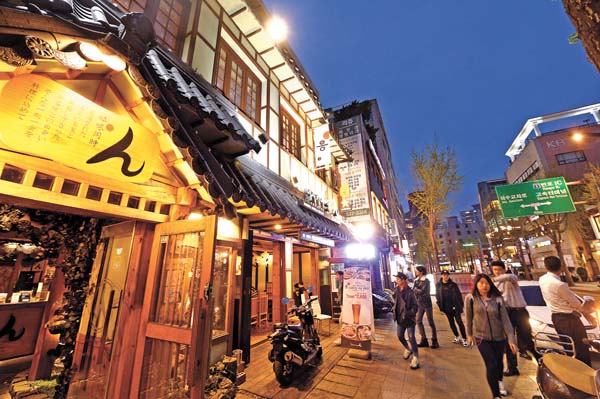 Shoppers browse the storefronts at Montmartre in Seocho in southern Seoul. The French community near Gangnam turned out to be the most popular commercial area in the country. [OH SANG-MIN]

The premier commercial district in all of South Korea isn’t Gangnam, Pyeongchang-dong or even the area around the United Nations village. It’s Montmartre, otherwise known as Seorae Village, or Banpo 4-dong, in southern Seoul. In this cozy French community just south of the Han River, visitors’ average monthly credit card expenditure is more than twice that of the second-highest ranked commercial area, the locale surrounding Euijeongbu Station.

This information was pulled from big data analysis by JoongAng Ilbo and Samsung Card, which examined credit card spending in the first two months of the year and the first two months of 2013 in order to rank 100 commercial districts and their characteristics, including the most popular types of purchases and the age and gender of each area’s biggest spenders.

The seasonal influence on credit card spending was not, however, taken into account, nor did the analysis include purchases made at major retail stores, such as E-Mart or Lotte Mart, or online shopping purchases, as the purpose of the survey was to assess private entrepreneurial businesses. Transactions at Starbucks were also excluded as card purchases made there did not appear in individual areas but were accumulated at its headquarters in Sogong-dong in downtown Seoul. As a result, Sogong-dong would have initially been the most fourth popular commercial district. Also, Myeong-dong, the ever-crowded shopping neighborhood, barely made it onto the top 100 list because most of its visitors are from China and Japan and Koreans only account for a small portion of the spending done there.

By number of visitors, Gangnam ranked first, followed by Montmartre, Yeongjongdo, COEX, Garosugil, Euijeongbu Station, Seohyeon Station in Bundang and Hongdae. However, Bupyeong 5-dong saw the biggest increase in its floating populating in just three years, indicating its potential for growth into a major commercial site.

The study shows that areas where major outlets have been established since 2013 have seen significant increases in spending. In fact, Moonbal-dong in Paju, where a Lotte outlet opened in 2012, saw the greatest spike in spending, increasing 2,846 percent in the past three years. Myeonmok 4-dong in Seoul, Gochon in Gyeonggi province’s Gimpo, Bupyeong 5-dong in Incheon and Doonsan 3-dong in Daejeon all saw credit card spending increases of more than 1,000 percent compared to the first two months of 2013.

Some commercial areas have seen a sharp increase in the number of newly opened stores. Sutaek-dong in Guri, Gyeonggi saw the number of stores grow more than 600 percent in the past three years while Bupyeong 5-dong in Incheon ranked second, followed by Yangje-dong in Seocho, Seoul, which all saw a more than 500 percent growth.

Montmartre has become the No. 1 commercial district in all of Korea largely thanks to spending made by women in their 40s, as the charming little neighborhood is brimming with authentic restaurants run by popular chefs and high-end bars.

This is an amazing achievement, considering that until the early 1980s, this region mostly made up of rice fields. But things started to change after a French school in Hannam-dong, Yongsan in Seoul was relocated there. This turned out to be the seed that began the growth of a small French community within Seoul.

Because the community is slightly out-of-the-way, a majority of consumers are residents, but the inflow of new customers has been growing, which has, in turn, aided the expansion of commercial zones within the area.

“The commercial area has widened by three or four blocks from the main road,” said Ahn Min-seok, a researcher at FR Investment, a real estate information provider. “A lot of outdated residential low-rises have been torn down and replaced by commercial buildings with unique designs.”

The rent for stores isn’t as expensive as in nearby Gangnam, and is almost the same as what one might expect to find north of the Han River. For instance, a 125 square-meter (1,345 square-foot) store on the first two floors of a building along the main road will cost about 6 million won ($5,151) with a deposit of 100 million won. At one popular three-way intersection, for example, a 205 square-meter store on the first two floors will fetch 10 million won with a 200 million won deposit. However, store owners in the neighborhood said the cost of opening a fine dining restaurant is chillingly expensive. Namely, about 1 billion won. The interior design and stocking wines alone cost roughly 100 million won.

Moonbal-dong in Paju, Gyeonggi, located within the cultural community known as Book City, is a new commercial zone that has recently become a major destination, as evidenced by the fact that credit card spending there has surged nearly 3,000 percent. Most of the visitors there are in their 30s and 40s. Those in their 30s accounted for 43 percent of credit card purchases while those in their 40s constituted 36 percent.

This is largely thanks to the Lotte outlet.

“People are flocking in to shop at the outlet, but when having their meal many head out to nearby restaurants,” said Kwon Kang-soo, an executive at Korea Establishment Realty Agent.

The most popular stores are ice cream shops, cafes and fast food restaurants. Convenient stores also saw their revenue nearly doubled. But stores that sell alcohol saw their revenue drop by 26 percent. Steak houses didn’t fare too well either, as most of the people visiting the neighborhood prefer to eat local delicacies.

“When starting a store it takes at least five years to get settled,” Kwon said, “and so those who want to open a shop have to be prepared for years of losses.”

Rent, however, is about half the price of a comparable place in the greater Seoul area. According to Budongsan 114, a real estate information provider, as of March this year, the average monthly rental price for a 3.3 square-meter space is 34,980 won with a deposit of 495,000 won. This means when opening up a 66 square-meter store, the monthly rent would amount to 700,000 won with a deposit of 10 million won.

Some commercial areas are specialized, such as Gasan-dong in the Gasan Digital Valley in Seoul, where many visit to purchase clothing and fashion accessories. One reason is because here shoppers can find a Lotte and Mario Outlet. The region has a long history of making clothes; in the 1980s, it thrived as a synthetic fiber market.

Although there are residents who shop in the area, those working at small and midsize IT companies are also contributing to the local economy by purchasing clothing and fashion items.

Consumers who are in their 60s or older turned out to have experienced the sharpest growth, at 315 percent, followed by those in their 50s with 204 percent.