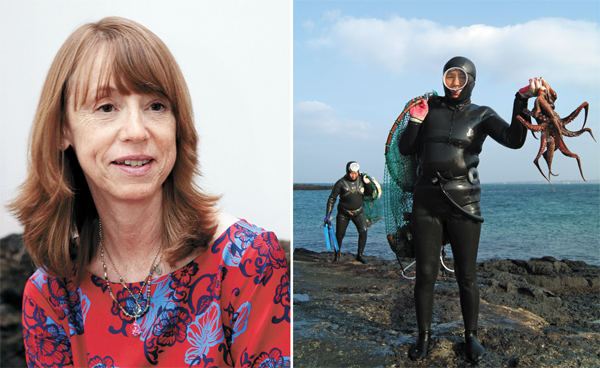 Left: Lisa See, Right: The novel by Lisa See about the female divers, above, on Jeju Island will be published about three years after her recent trip there. [CHOI CHOONG-IL]

The best-selling American author Lisa See, mesmerized by the stories of female divers in Jeju, who are also called haenyeo, or “sea women” in Korean, flew all the way to the island to study their lives.

“The unique breath sound that haenyeo make when they come above the sea surface is very energetic,” said See, author of the best-selling 2009 novel “Shanghai Girls.”

The peculiar breath of haenyeo, who can free-dive up to 20 meters (65 feet) deep and hold their breath for up to two minutes, is known as sumbisori in Korean.

The work that haenyeo do is known for the incredible risk involved, as every few seconds of extended diving can be fatal.

The 61-year-old author decided to write a novel about the brave and ardent lives of the female divers after she read about them in an article.

In an interview with the JoongAng Ilbo on Tuesday, the author said, “I was first introduced to haenyeo through an article that explained about them in the United States, and I came to Jeju Island for the first time to do research for the novel.”

See has been going around Jeju Island meeting female divers since May 3.

“I was surprised to see haenyeo diving way deeper than I expected,” See said. “I was inspired by their tolerant and sacrificing spirit, which led them to dive into the sea in spite of the great risk, just to feed their families.

I plan on writing the story as vividly as possible so that the readers can be in the shoes of the female divers.”

For the last six months, See has not only been studying the female divers but also the history, culture and natural environment of Jeju Island.

The author personally collected stories on how the divers struggled for survival amid the most tragic historical events in Korea, including Japanese colonization (1910-45) and the Jeju massacre of 1948, when a group of insurgents on the island attacked local police stations on April 3 to protest against South Korea’s exclusive presidential election in May 1948, as well as the U.S. base in Korea. A total of 3,000 people died in the government crackdown that followed.

She also met with the island’s local people as well as with Jeju shamans who perform exorcisms.

According to See, it will take about three years until she completes the novel. She returned for the United States on Friday.

Born in 1955 in France, See has been working as a writer in the United States and has published nine books. Most of her novels are about East Asian women who find themselves in the midst of historical events in the region.

One of her major works, “Shanghai Girls,” was translated into 39 languages after being published in the United States.