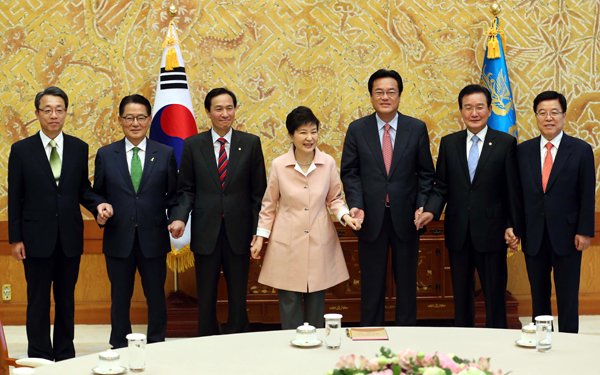 President Park Geun-hye, center, poses for a group photo with floor leaders and chief policy makers of three major political parties before they have discussions about legislative affairs in the Blue House on Friday. [JOINT PRESS CORPS]

President Park Geun-hye promised Friday to meet with leaders of the major parties every three months, fleshing out an earlier vow to foster cooperation in a National Assembly in which no party holds a majority.

Park met with floor leaders and chief policy makers of the Saenuri Party, the Minjoo Party of Korea and the newly emerged People’s Party for more than 80 minutes at the Blue House.

It was Park’s first meeting with the political leaders selected to lead the three major parties after the April 13 general election.

“We agreed that the president and heads of the three parties will meet on a regular basis, once every quarter,” said Kim Sung-woo, senior presidential secretary for public affairs, after the meeting. “The deputy prime minister for the economy and chief policy makers will hold a meeting to check on the economy as soon as possible.

“The government will also share more intelligence with the three parties on the security situation,” Kim said.

In the latest general election, the Saenuri Party won 122 seats in the 300-member National Assembly, which will start its 20th term on May 30. The Minjoo Party won 123 seats and the People’s Party won 38, ending two decades of two-party politics and bringing back a three-party system.

The Saenuri Party’s defeat was particularly shocking because it not only lost its majority but was reduced to being the second-largest party, promising troubles for the remainder of Park’s presidential term.

In modern Korean political history, the party of the incumbent president has lost its majority before but has always been the largest party.

Many, including Saenuri Party members, blamed the unprecedented defeat on Park’s high-handed way of running the country.

Friday’s meeting with the floor leaders and chief policy makers was her first step to better communicating with the legislature.

“Floor leader Park of the People’s Party raised the issue of the president’s lack of communication, and the president proposed the quarterly meeting,” a senior presidential official said. “She even said she is willing to meet more frequently if necessary.”

It remains to be seen when the first meeting will take place. “The three parties all have different situations,” the presidential source said, adding an old Korean saying, “Even if you are in a hurry, you cannot just tie a thread around a needle for sewing.”

The Saenuri Party remains headless, and it will hold a chairmanship election before September. Floor leader Chung will be the party’s acting leader until then.

Despite its election victory, the Minjoo Party is under an interim leadership. Its acting chairman, Kim Chong-in, is scheduled to step down from the post at the end of August or early September.

The People’s Party, for the time being, is run by two co-chairmen, Ahn Cheol-soo and Chun Jung-bae.

At the meeting, other sensitive issues were also discussed. According to the Blue House, the humidifier sterilizer scandal, where hundreds of people were killed or sickened, was addressed during the meeting.

“President Park said the prosecution’s special investigation team is thoroughly conducting the case and taking legal responsibilities,” Kim said. “The president proposed that the National Assembly, if necessary, form a consultative body with the government to further investigate it.”

A nationwide outbreak of mysterious pulmonary illnesses killed or injured hundreds of people in Korea from 2001 to 2011, and the government eventually linked them to toxic humidifier disinfectants.

As public rage snowballed over the government’s lack of oversight of the manufacturers and sellers of the chemical products, opposition parties have demanded the Park administration’s apology.

According to People’s Party floor leader Park, the president reminded the liberal parties that the incident took place during previous administrations.

Kim also said the two liberal parties requested the president allow a controversial song to be designated an official anthem for the May 18 Democratization Movement.

“The president said she would order the Ministry of Patriots and Veterans Affairs to find a resolution that will not split public opinion,” Kim said.

Controversy surrounding the song “March for the Beloved” started in 2009 after the government barred it from a commemoration of the 1980 Gwangju uprising against the authoritarian Chun Doo Hwan regime. Hundreds of civilians were estimated to have died in the suppression of that uprising.

As complaints grew, the Ministry of Patriots and Veterans Affairs allowed a chorus to perform the song in last year’s ceremony, but did not require participants to sing along. The ministry said the lyrics of the song could hurt unity of the country because it was used as background music for a North Korean film.

Park’s response to the request was positively received by the liberal parties. “I think we had progress on this matter,” Minjoo Party floor leader Woo said.

While some agreements were made, the president and party leaders failed to narrow their disagreement on some sensitive issues, including liberal lawmakers’ demand to extend the mandate of the special investigation into the 2014 sinking of the Sewol ferry. President Park’s initiatives for industrial restructuring and labor market overhaul were also snubbed by the liberals.

The Blue House on Friday expressed satisfaction with the meeting.

“I was actually surprised to see that the meeting produced such progress,” said a presidential source, adding President Park had shown a surprising willingness to cooperate with the ruling and opposition parties.

The three political parties issued varying evaluations of the meeting.

“We were able to confirm the possibility of cooperative politics,” Saenuri Party floor leader Chung said. “I could read satisfaction in the faces of [our liberal counterparts].”

He added that President Park’s proposal for regular meetings was praised by People’s Party floor leader Park. Park of the People’s Party said the meeting had a meaningful outcome.

“I said all I needed to say, and so did the president. It was a meeting that produced some good outcomes,” he said. “But I could also discern the different opinions of the president on some other issues.”

When he proposed an inter-Korean summit as necessary for Seoul to take control over the relationship with Pyongyang, the president was clear that the North must show a fundamental change in its attitude, he said.

“In my view, Park is not willing to hold inter-Korean talks or a summit,” he said.

The Minjoo Party issued the most mediocre evaluation.

“We saw some progress, but there were also limits,” Woo said.