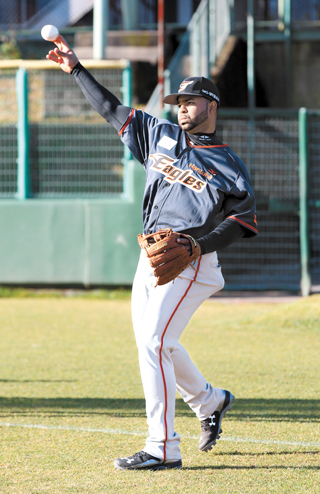 Wilin Rosario of Hanwha Eagles boasts the most illustrious career compared to any other foreign player in the Korea Baseball Organization (KBO).

Rosario was expected to be the slugging savior for the Eagles, who desperately needed a talent with the power to hit far. But, his numbers in the month of April were less than impressive. Although he had a .307 BA, Rosario only had one home run while striking out 24 times. He simply couldn’t get his head around the breaking balls, and because of his poor showing, in the last week of April he was often spotted in the dugout rather than in the field.

Although the Dominican had a rough April, he never gave up, eventually making a breakthrough. With the help of the Eagles’ hitting coach Kozo Shoda and his family, Rosario persevered and his hard work eventually paid off. In the past ten games in May, Rosario collected a .325 BA and 3 homers while striking out only twice. His season slugging percentage also went up to .530.

“You cannot always come out with a win in baseball,” said Rosario when asked about the April slump. “I think the same goes for personal records. When I was in bad shape, I tried to think optimistically, although when I was angry, I let it out. But I always try to have fun out in the field.”

Rosario became frustrated by his inability to make contact with breaking balls. “It wasn’t easy to be patient,” said Rosario. But April was valuable as it afforded him the opportunity to learn the lesson of self-control. “Right now, I’m just trying not to miss pitches inside the strike zone,” he added.

When asked about the driver behind his break away, Rosario attributed the recovery to a strong mentality. “I noticed that there is a big difference between Korea and the United States in terms of how to get over a slump,” said Rosario. “For example, if I am 0-for-20, we go to the video room first in the big league to look at the recordings of my plays and evaluate the problem. Then the coaching staff comes up with one suggestion. The rest of the solution comes down to the mental factor. For that, coaches ponder how to instill confidence.”

Rosario says Korea’s way of getting over a slump focus more on technical considerations, with the coaching staff giving directions. But he believes it’s better to leave the solution to the batter since no one’s there to help when the batter goes to the plate. The biggest difference between Korea and the United States, according to Rosario, is perhaps the role of trainers. More precisely, in the Major League, trainers offer more moral support, while in the Korean league, they concentrate almost entirely on training the players physically.

Support from his brother, Moises Fabian, and his hitting coach, Shoda, helped him overcome the month-long slump as well, Rosario says.

Fabian, who played ball for about 11 years in the Dominican Republic, came to Korea just before this season. Although Fabian is more of an amateur than a pro, he’s got a lot of experience under his belt. “He’s quite adept at strategic analysis,” said Rosario about his brother. “When I was struggling, we often discussed the problem. He even sent the recordings of my play to a coach in the Dominican Republic and got advice from him. He always carries around a notebook and checks my games. We go through his notes together which is enormously helpful.”

Fabian and Rosario’s family were the mental anchor that kept him steady during April, he says. Although Fabian is to return home in June, Rosario is more than glad to have his brother on his side at the moment.

Shoda worked with Rosario to successfully acclimate his batting technique to the Korean league. Rosario was aware that the reason the Eagles decided to pay him $1 million annually was for his slugging. But before training with Shoda, Rosario found he couldn’t live up to that expectation. “Shoda knows my strengths and weaknesses,” said Rosario. “We discussed and analyzed my problem and his explanations were easy to understand. Through training, we remedied the technical side of my problem which helped me to be at ease.”

Just as important as the effort he puts into training, he says, is the structure of training. “I sleep about seven to seven-and-a-half hours a day on average,” he said. “If I sleep more, I feel sluggish. After getting out of the bed, I eat a light breakfast before my weight training session. I watch the recordings after lunch. After arriving at the stadium, I go through the team exercises and then rest to prepare for the game. I try my best to maintain that routine.”

Despite the drama and poor showing out in the field during the first month of the season, he’s grown fond of Korea and its vibe, including the atmosphere of the stadium during games. “The fans treat me as their family,” said Rosario. “They cheer very enthusiastically.” But he feels that some fans might be a little shy outside the stadium and he hopes they will learn to approach him more freely. His teammates are also another reason behind his fondness of Korea.

“I really would like to offer my gratitude to my teammates, especially Kim Tae-kyun and Choi Jin-haeng,” he said. “The general ambience of the team at the moment is a little gloomy due to our poor record. I think I need to step up and cheer the team on. We need to think more optimistically.”

Although he’s willing to try his luck again in the big league, Rosario wants to channel his focus into his Korean team for now. But he doesn’t wish to extend his baseball career after retiring from the field. “I want to go back home and live a new life after retirement,” said Rosario. “I want to spend more time with my family. I also would like to revisit Korea. I want to learn more about the country as a tourist, not as a ball player.”