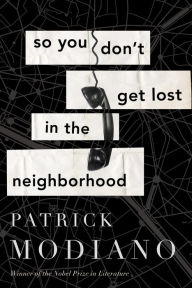 So You Don’t Get Lost in the

A haunting novel from the winner of the 2014 Nobel Prize in Literature.

In the stillness of his Paris apartment, Jean Daragane has built a life of total solitude. Then a surprising phone call shatters the silence of an unusually hot September, and the threatening voice on the other end of the line leaves Daragane wary but irresistibly curious. Almost at once, he finds himself entangled with a shady gambler and a beautiful, fragile young woman, who draw Daragane into the mystery of a decades-old murder. The investigation will force him to confront the memory of a trauma he had all but buried.

With “So You Don’t Get Lost in the Neighborhood” Patrick Modiano adds a new chapter to a body of work whose supreme psychological insight and subtle, atmospheric writing have earned him worldwide renown - including the Nobel Prize in Literature. This masterly novel, now translated into 20 languages, penetrates the deepest enigmas of identity and compels us to ask whether we ever know who we truly are. 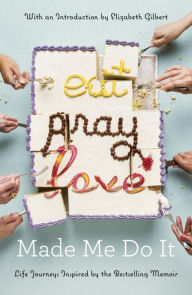 Eat Pray Love Made Me Do It: Life Journeys Inspired by the Bestselling Memoir

True stories inspired by one of the most iconic, beloved, best-selling books of our time.

In the 10 years since its electrifying debut, Elizabeth Gilbert’s “Eat Pray Love” has become a worldwide phenomenon, empowering millions of readers to set out on paths they never thought possible, in search of their own best selves. Here, in this candid and captivating collection, nearly 50 of those readers - people as diverse in their experiences as they are in age and background - share their stories. The journeys they recount are transformative - sometimes hilarious, sometimes heartbreaking, but always deeply inspiring.

“Eat Pray Love” helped one writer to embrace motherhood, another to come to terms with the loss of her mother, and yet another to find peace with not wanting to become a mother at all. One writer, reeling from a difficult divorce, finds new love overseas; another, a lifelong caregiver, is inspired to take an annual road trip, solo. A man leaves seminary, embraces his sexual identity, and forges a new relationship with God.

A woman goes to divinity school and grapples with doubt and belief. One writer’s search for the perfect pizza leads her to New Zealand and off-the-grid homesteading, while another, in overcoming an eating disorder, redefines her relationship not only with food but with herself. Some writers face down devastating illness and crippling fears, and others step out of their old lives to fulfill long-held dreams of singing, acting, writing, teaching and learning.

Entertaining and enlightening, “Eat Pray Love Made Me Do It” is a celebration for fans old and new. What will “Eat Pray Love” make you do? 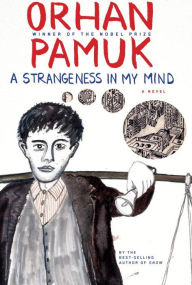 Strangeness in My Mind

Since his boyhood in a poor village in Central Anatolia, Mevlut Karata? has fantasized about what his life would become. Not getting as far in school as he’d hoped, at the age of 12 he comes to Istanbul - “the center of the world” - and is immediately enthralled by both the old city that is disappearing and the new one that is fast being built. He follows his father’s trade, selling boza (a traditional mildly alcoholic Turkish drink) on the street, and hoping to become rich, like other villagers who have settled the desolate hills outside the booming metropolis.

But luck never seems to be on Mevlut’s side. As he watches his relations settle down and make their fortunes, he spends three years writing love letters to a girl he saw just once at a wedding, only to elope by mistake with her sister. And though he grows to cherish his wife and the family they have, he stumbles toward middle age in a series of jobs leading nowhere. His sense of missing something leads him sometimes to the politics of his friends and intermittently to the teachings of a charismatic religious guide. But every evening, without fail, Mevlut still wanders the streets of Istanbul, selling boza and wondering at the “strangeness” in his mind.