The life and legend of ‘Lonely Cloud’

The life and legend of ‘Lonely Cloud’ 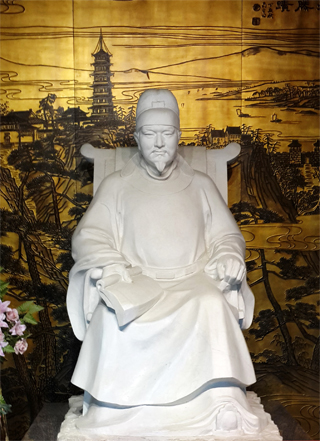 A statue of Choi Chi-won in a grand shrine in Yangzhou, Jiangsu province, China. Choi served as magistrate of what was then the wealthiest city of the Tang Dynasty (618-907). [DAVID MASON]

“Hwagye-dong in the east is a paradise in a gourd-shaped bottle!”

Chinese President Xi Jinping in 2015 sent this congratulatory message to an event in Seoul to promote Korean tourism to China. Xi borrowed the line from Choi Chi-won’s famous poem, which he had written while studying in Tang China (618-907) to pass the tough imperial examination. Choi (857-?) wrote a poem titled “A Paradise in a Gourd-Shaped Bottle” to console his deepening loneliness from living in a country far away from his homeland of Unified Silla (668-935).

The Chinese leader’s reference to Choi was not his first. In 2013, when President Park Geun-hye paid her first official visit to China, Xi quoted the first two lines of Choi’s famous poem “Set a Boat Afloat” - written in memory of his days in Tang China - in a symbolic gesture to underscore the close ties between Korea and China.

Choi Chi-won, whose pen name was “Go-un” - literally “Lonely Cloud” - was a brilliant scholar, a government official for both Tang China and Unified Silla, a writer, poet, philosopher and the creator of pungryu - an iconic ingredient of Korean culture, including the traditional performing arts in particular - as well as the initiator of the masterful blending of Confucianism, Buddhism and Taoism on Korean soil. The famous Joseon scholar “Dasan” Jeong Yak-yong (1762-1836) proclaimed him one of the three best writers of Korea’s first millennium. (The other two were Lee Gyu-bo and Buddhist National Master Cheonchaek).

In a 214-page book filled with a plethora of related photos and lists of places directly and indirectly linked to Choi, author David Mason, a professor at Chung-Ang University, offers a uniquely insightful review and analysis of the legacy of Go-un through his decades of tracing Choi’s footprints since his nearly accidental arrival in Korea in the early 1980s. The first full English book about the sage provides insight into the profound roots of Korean literature, culture and indigenous religions like Seondo.

Born in 857 in Gyeongju, capital of the then-waning Unified Silla Dynasty, Choi was sent by his father at the age of 12 to Chang’an (now Xi’an), the capital of the also then-declining Tang Dynasty. After six years of hard study, Choi passed the competitive civil service examination at age 18. (He successfully complied with his father’s orders that he should pass the test within 10 years.)

Starting out in such meager positions as a researcher and document author, Choi was soon promoted to the magistrate of Lishui County, south of the city of Nanjing, and was later posted to the wealthy city of Yangzhou after being recognized by Chinese Emperor Xizong for his assistance in suppressing the Huang Chao Rebellion, partly thanks to his powerful - and convincing - letter to the rebel leader.

Returning to Gyeongju in 885 at age 28 after 10 years of serving the court of Tang China, Choi was received with great honor by the local court of King Heongang and later appointed as a mid-level official in various palace offices. In the declining days of Unified Silla, however, his push for Tang-style reforms of the sclerotic bone-rank caste system and corruption was thwarted, which might have led him to flee the decadence, Professor Mason explains.

The author says that Choi’s biography in “Samguk Sagi” - a historical record of the Three Kingdoms of Korea written by Kim Bu-sik during the Goryeo Dynasty (918-1392) - does not mention his disappointment in having his “Ten Points of Reform” rejected, but describes his despair and self-exile in more general terms:

“Having served in the great Tang to the west, Choi Chi-won returned to his homeland in the east. But he found there only a nation suffering from chaotic rebellions; his feet were restrained, and to make any move would easily meet with disaster. Pained that he could not meet with better fortune after his reception, he did not again seek a career in officialdom.”

The first place the “Lonely Cloud” went to after leaving Gyeongju seems to have been Hwagye-dong Valley, past the grand Ssanggye Temple on Mount Jiri. Folktales say Choi “washed the corruption of his ears” with pure mountain water, while sitting on a rock known as the Se-i-am, literally “Washing-Ears Rock.” He then moved on to devote himself to learning, practicing and teaching the Seondo techniques of wisdom and immortality, the tradition of which extended to the Joseon sage Kim Shi-seup (1435-93) and even to present day through “hidden linage,” the author says. After wandering the southern parts of Unified Silla for decades, Choi is believed to have finally settled at Haein Temple on Mount Gaya in South Gyeongsang. Then he wrote of its history and delved into the world of Taoism, and became a shinseon, a Taoist hermit in immortality.

Not to mention his longstanding legacies in the Goryeo Dynasty and the following Joseon Dynasty (1392-1910), Choi still holds unparalleled significance in Korea’s unique cultural identity, including a striking combination of Confucianism, Buddhism and Taoism, underscores Professor Mason.

Kudos to the author’s unceasing effort to chronologically trace the life of “Lonely Cloud” in a reasonable fashion, despite a critical lack of historical records and documents about Choi. This was possible primarily thanks to Professor Mason’s nearly obsessive infatuation with Choi, as clearly seen by his own Korean name, Choi Mae-seon - literally, “a shinseon under a plum tree [in an ideal Taoist garden].”

See you soon in that mysterious place after drinking a couple glasses of makgeolli (rice wine) together, professor.